Mothers with hungry children lining up at distribution site in Taoa, Niger, for food handouts
18 November 2011

The majority of villages in impoverished Niger are now considered to be in a food and nutritional crisis, the United Nations humanitarian wing warned today, with the country facing especially tough times as the annual harvest season ends.

According to a joint UN-Nigerien communiqué, some 6,981 villages are deemed to be vulnerable to food insecurity, with particular concerns over the levels of infant and maternal malnutrition.

Elisabeth Byrs, a spokesperson for the UN Office for the Coordination of Humanitarian Affairs (OCHA), told reporters in Geneva that the drought-affected region of Tillabéry in the country’s west – where acute child malnutrition rates have passed 13 per cent – is also extremely worrying.

In the communiqué, issued last week, the UN and Niger say the landlocked nation has ended its harvest season with a deficit of more than 500,000 tons of cereals and at least 10 million tons of fodder for livestock.

Neighbouring countries in the Sahel region also face decreased levels of agricultural production, which could impact food prices, while the recent return of over 200,000 migrants from Libya to Niger has placed further strains on many communities.

Ms. Byrs said that while the food situation had improved from last year, the ongoing crisis had left rural populations struggling to cope – especially small-scale farmers that have not been able to re-constitute their herds.

Niger said in the communiqué that it would work with its humanitarian partners to establish an early response plan to try to alleviate the situation. 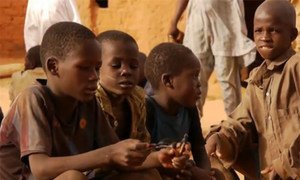 The United Nations food aid agency announced plans today to scale up its operations inside the poor West African country of Niger, where a poor harvest and insect attacks against cereals have left a million people in need of immediate support.