Thousands of Ivorian refugees to return to their villages – UN

IRIN/Nancy Palus
Children in line to receive a hot meal at the Catholic mission in Duékoué, western Côte d’Ivoire.
17 November 2011

The voluntary repatriation of internally displaced persons (IDPs) living in a refugee camp in western Côte d’Ivoire began this week with the support of the Government, the United Nations Office for the Coordination of Humanitarian Affairs (OCHA) reported today.

Thousands of people had fled their homes due to the post-electoral crisis in the country earlier this year. As of last month, 17,000 IDPs were living in camps, and nearly 170,000 were living with host families and communities.

After consulting with the humanitarian community, the Government started encouraging people in the camp in Duékoué to return to their homes.

“The return of displaced persons to their habitual neighbourhoods in Duékoué confirms the gradual return of confidence among communities,” said Ndolamb Ngokwey, Humanitarian Coordinator in Côte d’Ivoire.

“For this return to remain sustainable, humanitarian actors, traditional and religious authorities as well as the Government should redouble their efforts in providing assistance packages and guarantee the safety of lives and property,” Mr. Ngokwey said.

The repatriation is one of the efforts by the Government to guarantee assistance and protection to IDPs. In the next few days, 1,308 people that have been living in a Catholic mission camp will go back to their villages in the western part of the country. According to a news release issued by OCHA, more repatriation operations are expected in the near future.

Violence erupted in Côte d’Ivoire when former president Laurent Gbagbo refused to step down after he lost the UN-certified election to Alassane Ouattara, who was eventually sworn in after Mr. Gbagbo surrendered in April. 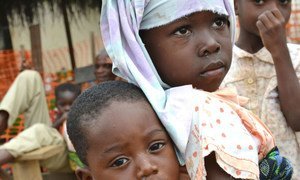 More funds are needed to provide vital aid to the hundreds of thousands of refugees in Côte d’Ivoire, the United Nations humanitarian affairs agency reported today, calling for the mobilization of donor support to help those who require assistance to return to their villages and rebuild their lives.