Unusually heavy rainfall in Thailand has left vast swathes of the country including the capital, Bangkok, inundated
16 November 2011

Secretary-General Ban Ki-moon today expressed United Nations solidarity with the people of Thailand after flying by helicopter over areas affected by the massive floods that have inundated large swathes of the country, saying the Organization stands ready to provide any assistance required.

“I am deeply saddened and humbled by what I have seen by helicopter while travelling over these affected areas,” Mr. Ban told reporters in the Thai capital, Bangkok.

“I am also very much sorry to hear of all the hardships from the victims. Words fail to describe what I am feeling, what I have seen, and it is beyond description. The reality is very shocking and alarming and surprising,” he said.

He said the floods that have affected an estimated eight million people and underlined the urgency of disaster preparedness and risk reduction measures across the world.

“Depending upon how well you are prepared, even though we may not be able to predict natural disasters, we can save many more human lives. I am again urging all Member States to strengthen their preparedness against disasters. The United Nations will continue to provide technical and logistical support,” he said.

Earlier at a news conference with Thai Prime Minister Yingluck Shinawatra, Mr. Ban said that the UN is working closely with the country’s disaster management agencies to tackle the flood emergency and expressed his sympathies for those who have lost loved ones and property in the disaster.

He said they had also discussed regional issues, including the situation in Myanmar and cooperation between the UN and the Association of Southeast Asian Nations (ASEAN).

“The Prime Minister briefed me on the current situation in Thailand and the efforts that are now under way for a national reconciliation dialogue.

“I encouraged the Prime Minister to continue these efforts through an inclusive, broad-based process. I also told the Prime Minister that the United Nations stands ready to assist in this important effort, including support for the Truth and Reconciliation Commission,” Mr. Ban told reporters.

The Secretary-General also met with UN staff at the offices of the UN Economic and Social Commission for Asia and the Pacific (UNESCAP), which is based in Bangkok, and expressed his sympathies to those who have been affected by the floods.

“You are setting aside your own hardships to help Thailand respond to this crisis. You have raised money. You are helping people to rebuild. You are showing that the United Nations cares deeply about our host city during its time of need,” Mr. Ban told UN staff.

At a round-table discussion on universal health coverage, the Secretary-General commended the Thai Government for its effective universal health-care programme which he said could be emulated by many other countries.

“I commend the National Health Security Office of Thailand. You have not only made all services free, you are also working to extend universal health coverage to all – migrants, refugees, ethnic minorities. Thailand has also used innovative approaches to deliver health care to rural populations.”

He said he had learned that providing health care for all required “innovative thinking” and that universal health coverage is not only the responsibility of health ministries. “It requires cooperation among all sectors – public, private and civil society.” 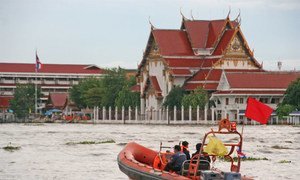 UNICEF ramps up efforts to help flood victims in Thailand

The United Nations Children’s Fund (UNICEF) is distributing more than 300,000 hygiene and sanitation items to flood-affected families in Thailand in an effort to prevent the spread of communicable diseases in the country.