The United Nations human rights office today voiced concern at recent events in Egypt, including the military trial and jailing of a blogger/activist, and called on the interim authorities to ensure full respect for basic freedoms.

Spokesperson Rupert Colville told reporters in Geneva that the Office of the High Commissioner for Human Rights (OHCHR) is concerned about what appears to be “a diminishing public space for freedom of expression and association.”

“The interim authorities in Egypt must guarantee full respect for the freedom of expression, association and assembly, which are particularly crucial to ensure the free and fair conduct of the upcoming elections,” said Mr. Colville.

One example of an “egregious” breach of the right to freedom of expression is the military trial and jailing of blogger and activist Alaa Abdel-Fatah, after his criticism of security forces’ handling of protests last month.

After a visit to the country in April, OHCHR had called for a repeal of the State of Emergency and a stop to military trials of civilians.

“It is disappointing to note that neither of these calls have been heeded and we urge the authorities to do so without further delay,” Mr. Colville said.

In addition, a restrictive 2002 law on non-governmental organizations (NGOs) has reportedly been used to investigate human rights groups and their funding sources.

“Civil society organisations and human rights activists, whose courage and non-violent protest brought about the change of regime in Egypt, must be guaranteed space for open debate, even if it means that the interim authorities are harshly criticised in public fora,” said Mr. Colville.

The Office called for the release of Mr. Abdel-Fatah and all others who have been imprisoned for exercising their fundamental rights to free speech and association.

In February popular protests aimed at greater freedoms in Egypt – part of a series of uprisings across North Africa and the Middle East – toppled the long-standing regime of Hosni Mubarak.

Secretary-General Ban Ki-moon and other UN officials have in recent months called on all Egyptians to preserve the spirit of the historic changes that took place earlier this year, and on the transitional authorities guarantee the human rights and civil liberties of its citizens. 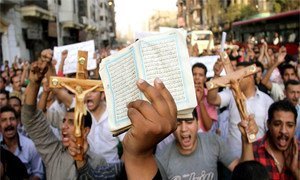 The United Nations human rights office today voiced its regret over the loss of life in the violent clashes on Sunday in the Egyptian capital and called on authorities to carry out an impartial and independent investigation into the incident.