Secretary-General Ban Ki-moon today briefed the General Assembly on the outcome of last week’s meeting of the Group of 20 (G-20) major economies, saying his key message was the need to ensure that the world’s most vulnerable people are not neglected, as he stressed the importance of investing in poverty reduction.

“I asked the G-20 leaders to seriously consider the options before them for innovative financing for development to supplement official development assistance [ODA],” Mr. Ban said, noting that the meeting in Cannes, France, was dominated by concerns over Greece’s financial difficulties and the threat the crisis posed to other Eurozone economies.

“And I expressed concern – both to the G-20 and at the L-20 meeting of labour union representatives – about the need to put as many people as possible, as fast as possible, back to work. I emphasized that the United Nations will continue to broker multi-stakeholder partnerships to achieve our common development goals.”

He said the G-20 gathering made progress on different fronts, including the setting up of the Agricultural Market Information System to be hosted by the UN Food and Agriculture Organization (FAO), and on ensuring that humanitarian food purchases by the UN World Food Programme (WFP) do not face export restrictions or extraordinary taxes.

The G-20 leaders put forward a “welcome” initiative to build on the work of his High-level Advisory Group on Climate Change Financing, Mr. Ban said, adding that he had emphasized in the leaders’ declaration that the UN will work with other international financial institutions to achieve that objective.

“A key immediate challenge is to get a scaled-up climate finance system up and running. I called on the G-20 countries to ensure that disagreements on the design of the new Green Climate Fund are resolved before COP17 [UN Conference on Climate Change] in Durban, so it can be launched.”

He informed the Assembly that, in close consultation with President Dilma Rousseff of Brazil, which will host the UN Conference on Sustainable Development (Rio+20), they had decided to change the date of the conference from 4-6 June next year to 20-22 June to facilitate the participation of leaders after the G-20 summit in Mexico on 18-19 June.

Mr. Ban also briefed the Assembly on his trip to Libya, accompanied by the President of the General Assembly, Nassir Abdulaziz Al-Nasser. He said he was deeply impressed by Libyans’ commitment to democracy, human rights, rule of law, accountability, respect for minority rights, and empowering women and youth.

He said he had stressed the need for national reconciliation, which must be founded on justice, and accountability for those with the greatest responsibility for human rights crimes under the previous regime.

Mr. Al-Nasser, for his part, told the Assembly that he had assured the Libyan leadership of the willingness of the UN to work closely with them to heal the country quickly so that it can become a “viable, respected and cooperative member of the family of nations.”

“While re-affirming Libya’s national ownership of the reconstruction, reconciliation and democratization process, our visit sent a very important message of support and goodwill from the membership of the United Nations General Assembly and the entire UN system, for the Government and people of Libya at this critical moment in their nation’s history,” he said.

During the visit, Mr. Al-Nasser said that he had underlined the importance for the transitional authorities to exercise full sovereignty of their country by extending control over all territory to prevent and curb the use of any illegal or unauthorized weapons.

“During this joint visit to Libya, we also visited a gravesite and spoke with victims’ families. It was a moment of intense emotion and gravity. We met with Libyans who have been tortured, who have seen their relatives being burned alive, who are desperately looking for the remains of their loved ones.” 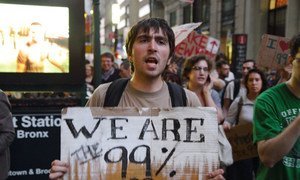 Secretary-General Ban Ki-moon today called on leaders of the world’s biggest economies meeting in Cannes to ensure a global recovery that is sustainable, inclusive and creates real change for those hit hardest.