Deputy Secretary-General Asha-Rose Migiro has commended Uruguay for joining the United Nations campaign that seeks to end violence against women by raising awareness and generating political will to implement measures to stem the scourge.

The ‘UNiTE to End Violence against Women’ campaign was launched by the Secretary-General in 2008 and calls for all countries to put in place strong laws, action plans, preventive measures, data collection, and systematic efforts to address sexual violence by 2015.

The UN Entity for Gender Equality and the Empowerment of Women (UN Women) developed the ‘Say NO-UNiTE’ social mobilization campaign which has registered more than two million actions by more than 600 partners worldwide, Ms. Migiro said yesterday in Montevideo, Uruguay.

“I am delighted to see that Uruguay has joined the campaign and is using the ‘Say No-UNiTE initiative in such creative ways.

“The social awareness campaign ‘Take Action Uruguay’ has found an innovative way to unify the concept of not accepting violence with that of concrete action,” she said.

At a separate event, Ms. Migiro commended the country’s contribution to UN peacekeeping operations over the past 50 years, noting that 25,000 Uruguayans have served in such missions and 28 of them lost their lives in the service of the UN.

“Uruguay contributes more peacekeepers in proportion to its population that any other country on earth,” she said when she visited the National Peacekeeping Training System in Montevideo.

“Put another way, if every country were as supportive of UN peacekeeping as Uruguay, we would not have to beg for equipment and troops. When you patrol a camp or disarm a fighter or help get relief aid to people who depend on it to survive, you are showing the United Nations at its best,” she added. 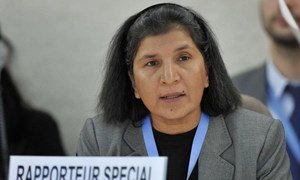 An independent United Nations human rights expert told the General Assembly today that violence against women across the world continues to be pervasive and widespread and reminded States of their obligation under international law to protect women.