The humanitarian emergency caused by last month's devastating floods in Central America is only just beginning, a top United Nations relief official said today, warning that the situation could get worse for the estimated 1.2 million people affected without urgent international support.

“The people affected by this crisis have lost everything, and their difficulties are only just beginning,” Catherine Bragg, Assistant Secretary-General for Humanitarian Affairs, said as she wrapped up a four-day visit to Nicaragua and El Salvador, two countries badly hit by the disaster.

“Hundreds of thousands of people face a struggle for survival over the next six months. We must act now. We cannot let the people of El Salvador and Nicaragua down.”

Up to 300,000 people fled the floods in El Salvador during the peak of the rains in October, and the homes and livelihoods of 143,000 people have been affected by heavy rains in Nicaragua. Thousands of homes have been damaged, possessions destroyed and hundreds of schools, roads and health facilities are closed.

The Governments and peoples of Nicaragua and El Salvador mobilized emergency responders immediately after the floods, and have succeeded in minimizing the loss of lives, according to the UN Office for the Coordination of Humanitarian Affairs (OCHA).

“But the cumulative effect of annual catastrophic events has pushed national capacities to their limit,” the Office said. The UN is mobilizing international assistance to assist the efforts of the Governments and last week launched emergency appeals for both countries.

“The needs are real, and the situation could get worse if we do not step in now,” said Ms. Bragg, who is also Deputy UN Emergency Relief Coordinator. “I hope donors will give generously to these appeals.”

♦ Receive daily updates directly in your inbox - Subscribe here to a topic.
♦ Download the UN News app for your iOS or Android devices.
Central America|flood 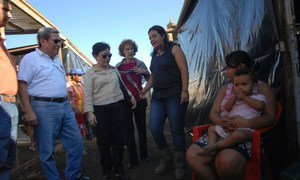 With an estimated 1.2 million people in Central America affected by severe floods, the United Nations is mobilizing resources to provide life-saving assistance to those in need, as a senior UN relief official visiting Nicaragua today described the situation in the country as a “real disaster.”