4 November 2011
It is vital for authorities in Moldova to ensure an independent judiciary, tackle discrimination and protect the rights of minorities as it works to strengthen democracy, the United Nations human rights chief said today.

“I welcomed the positive spirit of my meetings, as well as the engagement of the Government to seriously contemplate human rights reform,” High Commissioner for Human Rights Navi Pillay said at a press conference in Chisinau, the capital, at the end of her four-day visit.

“I was nevertheless troubled by the message of some that certain groups must wait for human rights,” she added. “I have been clear in emphasizing that, where human rights are concerned, the time is now.”

Ms. Pillay noted that her visit, the first to the country by a UN human rights chief, has been a timely one. “The country is clearly on the road to strengthening its democracy, and aims at a number of ambitious reforms.”

At the same time, she said the economic circumstances of the country are troubling. “I saw with my own eyes the poverty and material deprivation in which many Moldovans live. Issues such as very low pay and a weak public infrastructure have serious implications for the effective realisation of economic and social rights.”

She outlined a number of concerns, including strengthening the independence of the judiciary, the need to tackle the scourge of trafficking, especially of women and girls, and protecting the rights of certain groups in the country.

One group she particularly focused on were people who were confined to psychiatric institutions. She visited the Chisinau Psychiatric Hospital, where she spoke with numerous patients and with hospital staff, and was struck by the “very limited extent” to which forcibly interned patients have access to processes that could lead to their release.

“It is clear that comprehensive reforms are needed to ensure equality and dignity for people suffering from mental and intellectual disabilities,” she said. In general, people with disabilities need as far as possible to be integrated, not segregated, and strenuous efforts need to be made to help people lead an active life in the community rather than be locked away in institutions.”

During talks with senior Moldovan officials, Ms. Pillay highlighted a range of problems related to discrimination against various religious minorities, especially Muslims, Jews, Protestants and Jehovah’s Witnesses; the Roma, who are “systematically excluded” and “almost completely unrepresented” in government; and lesbian, gay, bisexual and transgendered people.

In order to combat such discrimination, she stressed the need to enact as soon as possible a truly comprehensive law banning discrimination on all grounds.

“My message to the Government – and to the public – is that diversity is among our highest values. A democracy is only as strong as its ability to protect its most vulnerable,” she stated.

She also voiced concern at a punitive fine issued against the weekly journal Ziarul de Garda, adding that such measures are “incompatible with democratic societies based on the rule of law.”

The education system, said the High Commissioner, can and should play a key role in combating discrimination and promoting diversity. At the same time, well-constructed and properly implemented laws are also essential.

“It is deeply troubling that, despite all the problems facing the wide range of groups I have mentioned, the legal system in practice remains inert in redressing discrimination and violent acts motivated by intolerance,” she said.

Ms. Pillay’s mission included a visit to the Transnistrian region, where she held meetings with the de facto authorities on issues concerning violations of minimum international standards relating to conditions in places of detention, as well as persistent allegations of arbitrary detention, torture and ill-treatment in custody.

She noted that the work of her office (OHCHR) with de facto authorities on human rights issues does not amount to their legitimisation.

Moldova: ‘A small country with a big heart’ 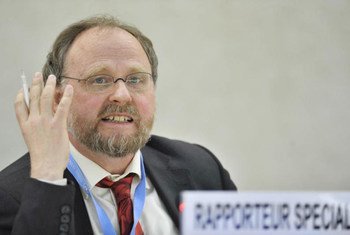