Vijay Nambiar, Special Adviser to the Secretary-General on Myanmar

4 November 2011
The United Nations envoy for Myanmar today called on the authorities to keep up the momentum of recent initiatives to strengthen national unity and advance dialogue and reconciliation, stressing the ‘historic opportunity’ they have to set the country on a new path.

This was the third visit since last year’s election for Special Adviser Vijay Nambiar and the second since the establishment of a new Government seven months ago. It also comes amid the ongoing dialogue between the Government and pro-democracy leader Daw Aung San Suu Kyi, and the release last month of a significant number of detainees.

“At this juncture, it is of crucial importance, for Myanmar’s regional and global standing, to maintain the positive momentum that these initiatives have generated,” Mr. Nambiar, who is also Secretary-General Ban Ki-moon’s Chief of Staff, said in a statement issued in Yangon at the end of his five-day visit.

He said the UN strongly encourages the continuation of such efforts as well as the reform agenda led by President Thein Sein as the best way to strengthen domestic and international confidence in Myanmar’s commitment to a reform process that is incremental, systematic and sustainable.

“In particular, we encourage all concerned to build on the steps taken thus far through an inclusive and broad-based political process to strengthen national unity,” said the envoy.

“The release of the remaining political prisoners as part of the recent amnesty process and the enactment of the proposed amendments to the political party registration law are steps that can and should be taken as a matter of priority. Continuous dialogue is also needed to bring about peace and development in border areas.

“If sustained, these and other efforts offer a historic opportunity to set the country on a course that can fulfil the promises made to the people of Myanmar,” he stressed.

During his visit, Mr. Nambiar met with a number of Government officials in Naypyitaw, including Vice-President U Tin Aung Myint Oo, as well as with the Union Peacemaking Group and with the Union Election Commission.

In Mandalay and in Pathein, he was received by the Chief Ministers of Mandalay region and Irrawaddy region, respectively, and in Yangon, he met with Ms. Suu Kyi at her residence. He also met with representatives of several political parties and with civil society groups, as well as with the National Human Rights Commission.

Mr. Nambiar also participated earlier this week in the first Green Economy Green Growth conference, which he said showed that it is now possible for a wide range of actors to come together to openly discuss common concerns.

“It is an indicator of the direction in which Myanmar must continue to move if its democratic transition process is to succeed and if the country is to contribute to the global agenda by effectively addressing such concerns at home,” he stated.

He told the gathering of business leaders, academics, government officials, civil society groups and private citizens that in Myanmar, as elsewhere, green growth is an integral part of efforts to protect the environment while creating decent jobs, reducing poverty and inequality, and achieving globally agreed development targets.

“As Myanmar opens up to a changing world, the green growth agenda can help drive the advancement of sustainable development: it is good business – good politics – and good for society,” he stated.

The Special Adviser also addressed a ceremony yesterday to commemorate the 50th anniversary of the swearing-in of U Thant, a “great son of Myanmar” who served as the third Secretary-General of the UN.

“It is for the Government and people of Myanmar to maximize opportunities and to lead the changes they want to see for their country,” said Mr. Nambiar. “We in the United Nations wish and want Myanmar to succeed. But it has to be a success that is inclusive and includes all elements in the country to the extent that we can help facilitate the efforts which are essentially nationally owned.” 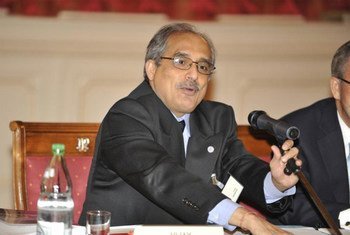 31 October 2011
A top United Nations official arrived today in Myanmar for a five-day visit during which he will meet with a number of Government officials and other key actors.