The head of the United Nations peacekeeping mission in Côte d’Ivoire has assured authorities there that the Organization will provide the West African country with the support it requires to ensure that legislative elections next month are held successfully and in a peaceful atmosphere.

The Secretary-General’s Special Representative and head of the UN Operation in Côte d’Ivoire (UNOCI), Bert Koenders, made the assurance to Prime Minister Guillaume Soro when they met yesterday.

“It will be multi-faceted support involving human resources, equipment, logistics and, of course, security,” said Hamadoun Touré, the UNOCI spokesperson, during the mission’s weekly press conference in Abidjan today.

He said to the weekly meeting of military and security chiefs at UNOCI headquarters yesterday had also discussed security arrangements during the elections, which are scheduled for 11 December.

The UN mission is also intensifying its campaign to make people aware of their responsibility to maintain peace during the electoral process, Mr. Touré said. The awareness campaign is being carried out through training and information workshops for grassroots leaders, as well as through sports activities.

“UNOCI’s Disarmament, Demobilization and Reintegration Division is pursuing its mission and, in that connection, it collected 39 firearms, 25 grenades and 2,700 pieces of ammunition from 87 ex-combatants last week,” said Mr. Touré.

He said the mission deplored frequent incidents of violence along some roads in the country’s west and north, where the activities of a number of illegal armed groups have given rise to serious human rights violations.

UNOCI had recommended that the Government conduct appropriate investigations into all cases of human rights violations in the country and bring perpetrators to justice.

The Government should also make efforts to ensure security in all parts of the country and implement a new national programme for the disarmament, demobilization and reintegration of ex-combatants and other militias as required by a Security Council resolution. 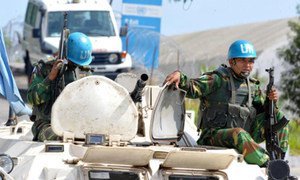 The United Nations peacekeeping mission in Côte d’Ivoire today encouraged all candidates who are interested to register for the legislative elections scheduled for 11 December as part of the ongoing efforts to restore peace and stability.