Secretary-General Ban Ki-moon today called on leaders of the world’s biggest economies meeting in Cannes to ensure a global recovery that is sustainable, inclusive and creates real change for those hit hardest.

“We come together at a critical moment,” Mr. Ban said in remarks to the 2011 Labour Summit (L20). “Dark clouds have gathered once again over the global economy. Some may speak of ‘recovery.’ Too few actually feel it.”

“On the contrary, all too many people cannot even see the light at the end of a long, long tunnel,” the Secretary-General told the gathering, held on the margins of the summit of the Group of 20 (G-20) major economies that began today.

He noted that unemployment is rising almost everywhere, and more and more young people have no jobs and few prospects of finding one. In addition, economic inequalities are widening and poverty is growing.

“That’s why people are marching. They are anxious, angry and indignant,” he stated. “At heart, this is a call for human dignity – the dignity and respect that comes from decent work.”

He stressed that the two-day summit of the G-20 must be about more than “financial fire-fighting.”

“It is must be about global economic recovery – growth that is sustainable and inclusive. It must bring real recovery in the real economy.”

The time has come, he stated, to write “a new social contract for the 21st century” – one that includes a global jobs pact.

“We need a job-rich recovery. Policy-makers must make employment a priority, not an afterthought. The new social contract must also include a social protection floor with stronger safeguards for the poorest and most vulnerable.”

He noted that in recent decades, labour’s share of income has fallen, and the gap between those who work hard and those who reap the greatest rewards continues to grow.

“To get out of this mess, we need a revolution in our thinking,” the Secretary-General told world leaders, highlighting the sorts of investments that make the most sense for the most people.

“Sustainable energy fuels jobs – jobs that recharge economies, jobs to build infrastructure, above all, jobs to protect the planet and the poorest.

He also highlighted the need to invest in women and youth, who together make up more than two thirds of the global population, as well as in the most vulnerable.

Mr. Ban also noted that over the last century, the trade union movement led the way to a fairer and more just world.

“You helped create our modern era of prosperity. In the process, you did much more than simply benefit your own members. You lifted millions out of poverty into a better life. You proved that the better more of us do, the better all of us do,” he said.

“At this time of crisis and confusion, discord and division, inequality and injustice – we are all called to moral battle once again.”

While at the summit, Mr. Ban will also take part in a number of G-20 working sessions, including on the global economic situation and on development and trade, as well as hold bilateral talks with leaders on the margins of the forum.

He met earlier today with the President of the Republic of Korea, Lee Myung-bak, and later with Ethiopia’s Prime Minister Meles Zenawi.

The Secretary-General expressed his hope that the EU would play a strong leadership role in the run up to the UN Conference on Sustainable Development (Rio+20), and at the meeting itself in Brazil in June next year.

Mr. Ban, Mr. Barroso and Mr. Van Rompuy also exchanged views on the situation in Syria, as well as on the Middle East peace process and the Palestinian UN membership issue. They also touched on progress in the UN-facilitated talks aimed unifying Cyprus.

♦ Receive daily updates directly in your inbox - Subscribe here to a topic.
♦ Download the UN News app for your iOS or Android devices.
G20 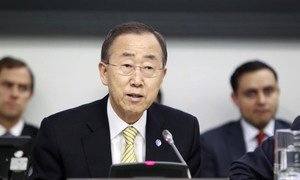 Secretary-General Ban Ki-moon is calling on the world’s biggest economies to heed the voices of global public protest at their G-20 summit next week and show the bold leadership needed to resolve the global economic crisis and achieve sustainable development.