Secretary-General Ban Ki-moon and General Assembly President Nassir Abdulaziz Al-Nasser today made an unannounced visit to Tripoli, where they hailed the bravery of the Libyan people in throwing off tyranny and urged them to remain united in rebuilding the country.

Speaking to reporters in the capital, Mr. Ban said he was honoured to be visiting Tripoli at such a historic moment and to salute the people of Libya, who paid a heavy price for freedom.

“We are here together to send our strong support and admiration and respect for all your heroic struggles to achieve democracy and freedom,” Mr. Ban said at a joint press conference with Mr. Al-Nasser and Mustafa Abdel Jalil, the Chairman of the National Transitional Council (NTC).

On 23 October the NTC declared the full liberation of Libya, more than eight months after the popular uprising began and days after the death of long-time leader Muammar Al-Qadhafi.

The Secretary-General said the path to democracy is not easy, and that building a State with effective and accountable institutions would take time. “But the Libyan people have shown that they have the skills, resources, determination and will to rise to these challenges.”

Mr. Ban added that as Libya moves forward, it will be critical that the people find consensus on major issues and remain united.

“Libyans inspired the world in throwing off tyranny. In building a future of peace and dignity for all, I am confident that you will inspire the world once again.”

Mr. Al-Nasser told reporters that the people of the North African nation have gone through a very painful and difficult transition that has claimed many lives and caused a lot of suffering.

“We congratulate the current Libyan leadership for the boldness and courage they have shown so far,” he said. “We urge the Libyan authorities and everyone in a position of responsibility, as well as Libyan civil society, to continue to show exemplary leadership and create the atmosphere for freedom and prosperity for all.”

Both Mr. Ban and the Assembly President pledged the continued support of the UN to help Libya on its important journey of reconciliation, reconstruction and democracy.

In addition to Mr. Jalil, the two men also held talks with other members of the NTC, newly-appointed Prime Minister Abdulrahim el-Keib and other senior Libyan officials. They also met with civil society and visited a mass grave site and talked with the families of the pro-revolution sympathizers who were killed there.

Mr. Ban said that Libyan officials expressed a clear commitment to building a democratic Libya, grounded in respect for human rights and the dignity of every woman, man and child.

“The new Libya aspires to be a nation free from fear, free from injustice and free from the oppression of the past. The United Nations will be your partner in turning those hopes to reality.”

The UN has a mission on the ground, headed by the Secretary-General’s Special Representative for Libya, Ian Martin, to support the Libyan people and their authorities in areas such as elections, a new constitution, human rights, public security and the control of weapons.

During a meeting with UN staff in Tripoli, the Assembly President paid tribute to the extraordinary work and dedication of staff of the UN and various humanitarian organizations who continued to help the people of Libya during the recent conflict, and encouraged them to work more closely with the authorities and civil society groups.

Following the visit to Libya, Mr. Ban travelled to Cannes, France, to attend the two-day summit of the world’s Group of 20 largest economies (G-20) that begins tomorrow. 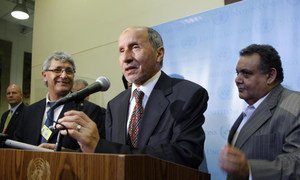