The events of the past 10 months highlight the enormous power of young people in changing the world, the Deputy Secretary-General has said, calling on this segment of society to help shape a better future.

Asha-Rose Migiro noted that the world faces an increasingly complex set of realities, from rising joblessness to growing inequality to the increasing dangers of climate change. People are anxious about their well-being today and their prospects for a better future.

“We need to forge a common agenda that can help ensure peace, prosperity, freedom and justice for all. Young people have a crucial role to play in building that future,” she said yesterday in remarks at the University of Missouri in Kansas City.

“Sometimes the contributions of the world’s youth are not acknowledged sufficiently,” Ms. Migiro noted. “But one need only look at the events of the past 10 months to see your power.”

Young people led successful movements against repressive governments in Egypt and Tunisia, she said. They are also combating poverty and hunger, protecting the environment, halting the spread of HIV and AIDS, and standing up for the rights of those who suffer discrimination based on gender, race and sexual orientation.

“They are, in short, demanding the dignity and opportunities that are their right.”

Ms. Migiro encouraged students to think beyond themselves and “engage with the big challenges of our day, be a global citizen, and be part of making the world a better place.”

Noting that technology and social media have collapsed barriers and transformed the way young people communicate, she said there are plenty of opportunities for them to learn about the world, engage on topics that interest them and interact with others from around the world.

“I encourage you to follow issues that matter to you, seek out the views and perspectives of others, and bring your own ideas into the discussion about our common future,” she said.

In a separate address yesterday to the Greater Kansas City Chapter of the UN Association of the United States, Ms. Migiro noted that the world faces an increasingly complex set of realities, including a prolonged economic crisis.

There is also growing concern about the ability of governments to address current challenges, and to deliver the results people need, when they need them, she said, adding that these challenges and uncertainties are also a major concern of Secretary-General Ban Ki-moon.

Last month, in his annual address to the full membership of the UN, Mr. Ban outlined five ways to advance peace, prosperity, freedom and justice for all.

“We have five imperatives – five generational opportunities to shape the world of tomorrow by the decisions we make today,” he said ahead of the opening of the General Assembly’s annual high-level debate.

With funds from Japan, UN agencies to extend youth project in Balkans 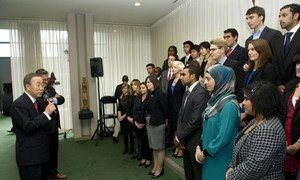 Young people from 22 countries have gathered at the United Nations this week to shine a light on the impact that the global economic crisis is having on youth around the world.