Secretary-General Ban Ki-moon today announced the members of a high-level group tasked with mobilize action among governments, the private sector and civil society for one of his key initiatives – supporting the provision of clean and affordable energy for everyone.

“From job creation to economic development, from security concerns to health and the status of women, energy lies at the heart of all countries’ core interests,” Mr. Ban told reporters today at a press briefing on the Sustainable Energy for All initiative in New York.

“Energy is the golden thread that runs right through all,” he said, adding that the international community needs to work together to minimize the negative effects of fossil-fuel based energy sources and move towards a “clean energy” economy.

The high-level group consists of 46 members who are global leaders in business, finance, government and civil society, and their job is “to catalyze partnerships, commitments and action – in corporate board rooms, in government ministries, and on the ground in thousands of local communities,” said Mr. Ban.

The group will help to develop an action agenda to support Mr. Ban’s vision statement on his initiative, also released today, which sets three objectives to be achieved by 2030: ensuring universal access to modern energy services; doubling the rate of improvement of energy efficiency; and doubling the share of renewable energy in the global energy mix.

Mr. Ban emphasized the relevance of the initiative by highlighting the ways in which affordable energy can alleviate certain aspects of the current economic crisis by helping to “reduce poverty, drive economic dynamism and reduce risks of climate change.”

The group will be co-chaired by Kandeh Yumkella, the Chair of UN Energy and the Director General of the UN Industrial Development Organization (UNIDO), and Charles Holliday, Chairman of Bank of America. Its other members include Peter Löscher, chief executive of Siemens; Ibrahim Mayaki, the chief executive of the New Partnership for Africa’s Development (NEPAD); and Petter Nore from the Norwegian Agency for Development Cooperation, among others.

Mr. Yumkella stressed that “many of the world’s most pressing challenges can not be addressed when 20 per cent of humanity has no access to electricity, and nearly 40 per cent rely on charcoal or wood for cooking or heating.”

Speaking about the group’s mandate, Mr. Yumkella added its goal is “to help change people’s lives so they have the access to energy they need to build more productive, healthier lives.”

Mr. Ban also called on the General Assembly to lend its support to the high-level group, highlighting during an address this afternoon the importance of gathering political will to achieve the objectives of the Sustainable Energy for All initiative.

In addition to the action agenda, the high-level group will announce a range of commitments and partnerships at the UN Conference on Sustainable Development Rio +20, which will take place in Rio de Janeiro, Brazil, next June. 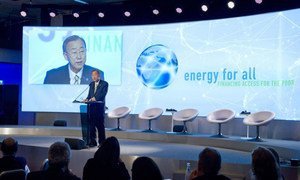 Secretary-General Ban Ki-moon called today for a “clean energy revolution” to help the estimated three billion people that lack modern power and urged countries to recognize the impact that energy security has on all aspects of development.