It is vital that Member States strengthen efforts to tackle piracy off the Somali coast, a senior United Nations official stressed today, adding that current initiatives, while laudable, are insufficient.

Tayé-Brook Zerihoun, Assistant Secretary-General for Political Affairs, told a meeting of the Security Council that the international community has responded with an “unprecedented” effort to counter piracy, including through a naval presence off the coast of Somalia which has resulted in the reduction of incidents of piracy at sea.

In addition, more and more pirates are being arrested and prosecuted, and information sharing and coordination have improved, he said, as he presented the annual report of the Secretary-General on piracy off the Somali coast.

“Despite these unprecedented efforts, attempts to stem pirate attacks off the Horn of Africa remain insufficient,” Mr. Zerihoun stated, adding that Somali pirates have expanded their operations well into the Indian Ocean.

According to the International Maritime Organization (IMO), 316 people and 15 vessels were being held hostage as of early October 2011.

Mr. Zerihoun noted that the pirates’ technical capacities have increased and they have become more violent. Many young Somalis continue to be willing to take the risk of becoming criminals at sea.

Another cause of concern is reports of links between pirates and the Islamist militant group in Somalia known as Al-Shabaab, according to the official. Somali piracy could also be inspiring attacks elsewhere on the world’s shipping lanes, particularly in the Gulf of Guinea, he added.

“It is important that Member States and international actors redouble their efforts,” said Mr. Zerihoun.

The fight against piracy off the coast of Somalia can only be won through an integrated strategy that tackles deterrence, security, the rule of law and development, he noted, adding that counter-piracy efforts should be an integral element of the Somalia peace process.

He said it is also worth looking at interim objectives, including developing Somali capacity to deal with piracy on land and waters close to shore through the establishment of a coast guard.

“The Somali people, especially the youth, need greater incentives not to succumb to the lure of piracy. Economic rehabilitation and the creation of alternative livelihoods, especially the development and rehabilitation of coastal fisheries, must be at the centre of efforts to fight piracy. But as long as piracy is lucrative, alternate livelihood options will be a hard sale,” he stated.

Last week the Council adopted a resolution renewing its call for tougher anti-piracy measures in Somalia and the wider region, and urging all countries to adopt laws and cooperate with international organizations to accelerate the prosecution and punishment of piracy.

It also emphasized that the failure to prosecute persons responsible for piracy undermines the broader anti-piracy efforts of the international community, and stressed the need to establish specialized anti-piracy courts in Somalia and other countries in the region. 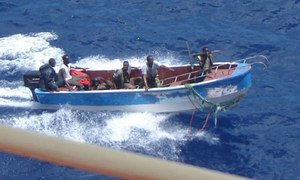 The Security Council renewed its call today for tougher anti-piracy measures in Somalia and the wider region, urging all countries to adopt laws and cooperate with international organizations to accelerate the prosecution and punishment of piracy.