Eunavfor
The issue of piracy in the Gulf of Guinea was raised by several West African officials at the 66th General Assembly annual general debate in New York.
31 October 2011

The Security Council today condemned all acts of maritime piracy and armed robbery at sea in West Africa’s Gulf of Guinea and welcomed the intention by States in the region to convene a summit to consider a comprehensive response to the menace.

The regional anti-piracy effort will also include the development and strengthening of domestic laws and regulations to implement relevant international agreements on the safety and security of navigation, in accordance with international law.

The Council encouraged ECOWAS, ECCAS and the GGC to counter piracy in the Gulf of Guinea through bilateral or regional maritime patrols, in line with relevant international law, while ensuring that such activities do not hinder the freedom of navigation on the high seas or the right of passage in the territorial sea to vessels of other States.

The 15-member United Nations body urged States, in cooperation with the shipping industry, the insurance industry and the UN International Maritime Organization (IMO), to issue to ships entitled to fly their flag, appropriate advice and guidance on avoidance, evasion and defensive techniques and measures to take if under attack or threat of attack.

The Council called on Member States of ECOWAS, ECCAS and GGC, in conjunction countries where ships are registered and States of nationality of victims or perpetrators of maritime piracy to cooperate in the prosecution of suspects, including facilitators and financiers, in accordance with applicable international laws, including human rights law.

The Council also encouraged the international community to assist, on request, countries in the region, as well as other relevant organizations, in strengthening their efforts to counter piracy and armed robbery in the Gulf of Guinea.

It also welcomed the intention of Secretary-General Ban Ki-moon to deploy a UN assessment mission to examine the threat of piracy in the Gulf of Guinea and explore options on how best to address the problem, saying it looked forward to receiving the mission’s report with recommendations on the issue.

Earlier this month Mr. Ban urged States and regional organizations in the Gulf of Guinea to develop a comprehensive and integrated strategy to combat maritime piracy, which he said was threatening to hinder economic development and undermine security in the region. 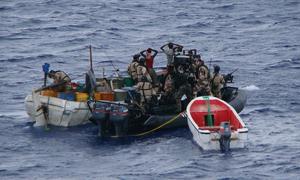 Secretary-General Ban Ki-moon today urged States and regional organizations in West Africa’s Gulf of Guinea to develop a comprehensive and integrated strategy to combat maritime piracy, which he said threatens to hinder economic development and undermine security in the region.