Palestine’s entry will bring the number of UNESCO’s Member States to 195.
31 October 2011

The United Nations Educational, Scientific and Cultural Organization (UNESCO) today voted to admit Palestine as a full member of the Paris-based agency.

UNESCO’s General Conference, the agency’s highest ruling body, took the decision by a vote of 107 in favour to 14 against, with 52 abstentions, according to a news release.

The move brings the total number of UNESCO member States to 195.

“The admission of a new member State is a mark of respect and confidence,” UNESCO Director-General Irina Bokova said following the vote. “This must be an opportunity to strengthen the Organization and not weaken it, a chance for all to commit once again to the values we share and not to be divided.”

Ms. Bokova voiced concern by the “potential challenges” that may arise to the universality and financial stability of UNESCO. “I am worried we may confront a situation that could erode UNESCO as a universal platform for dialogue. I am worried for the stability of its budget.

“It is well-known that funding from our largest contributor, the United States, may be jeopardized,” she noted. “I believe it is the responsibility of all of us to make sure that UNESCO does not suffer unduly as a result...

“UNESCO’s work is too important to be jeopardized,” she stressed.

Secretary-General Ban Ki-moon, asked about the UNESCO decision during a press conference in New York, said that it is up to Member States to ensure that the UN system as a whole has consistent political and financial support.

“As such, we will need to work on practical solutions to preserve UNESCO’s financial resources,” he stated.

He also emphasized once again the urgency of a negotiated solution to the Israeli-Palestinian conflict, stressing that the two-state solution is “long overdue.”

For its membership to take effect, Palestine must sign and ratify UNESCO’s constitution, which is open for signature in the archives of the Government of the United Kingdom in London.

Admission to UNESCO for States that are not members of the UN requires a recommendation by the agency’s Executive Board and a two-thirds majority vote in favour by the General Conference.

It is tasked with setting the programmes and the budget of UNESCO. It also elects the members of the Executive Board and appoints, every four years, the Director-General.

The current 36th session of the General Conference began on 25 October and will run through 10 November.

UNESCO’s mission is to contribute to the building of peace, the eradication of poverty, sustainable development and intercultural dialogue through education, the sciences, culture, communication and information.

♦ Receive daily updates directly in your inbox - Subscribe here to a topic.
♦ Download the UN News app for your iOS or Android devices.
palestin|member 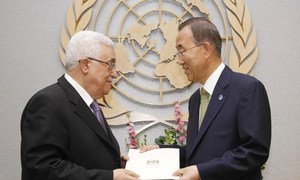