A comic book produced by the United Nations to raise awareness and to educate children around the world about the anti-poverty targets known as the Millennium Development Goals (MDGs) was honoured today with a prize at an awards ceremony in Monaco.

A comic book produced by the United Nations to raise awareness and to educate children around the world about the anti-poverty targets known as the Millennium Development Goals (MDGs) was honoured today with a prize at an awards ceremony in Monaco.

The six organizations involved in the project were awarded the Special Jury Prize at this year’s Peace and Sports Awards for “Score the Goals: Teaming Up to Achieve the Millennium Development Goals.”

While on the island, the team has to tackle the eight MDGs along their journey towards being rescued. The MDGs are targets aimed at slashing global poverty by 2015 by combating hunger, disease, illiteracy, environment degradation and discrimination against women.

Secretary-General Ban Ki-moon said that the award is a welcome recognition of how the UN family is working creatively with a wide variety of partners to deliver its educational messages and fulfil its mission towards achieving the MDGs.

“By using the power of sport and the universal reach of football Goodwill Ambassadors, the UN organizations involved in ‘Score the Goals’ have succeeded in projecting the UN voice beyond its usual audiences, reaching the crucial constituency of children and youth,” he said.

The book, primarily aimed at children between the ages of eight and 14, is currently available in English, French, Spanish, Chinese, German and Korean.

It provides an interactive way to help young people understand, familiarize and reflect about the MDGs as well as invites them to take action through several activities provided in an adjoining educational guide.

The comic book was officially launched in January in Geneva by the Secretary-General’s Special Adviser on Sport for Development and Peace, Wilfried Lemke, and Mr. Casillas, the Spanish and Real Madrid goalkeeper.

The project is the result of a joint effort led by the UN Office on Sport for Development and Peace (UNOSDP), in collaboration with the UN Development Programme (UNDP), the Food and Agriculture Organization (FAO), the Joint UN Programme on HIV/AIDS (UNAIDS), the UN Department of Public Information (DPI), and the Stop TB Partnership.

The prize was presented by Prince Albert II of Monaco in front of an audience of more than 500 prominent figures from politics, sport, the private sector and civil society who are participating in the 5th Peace and Sport International Forum. 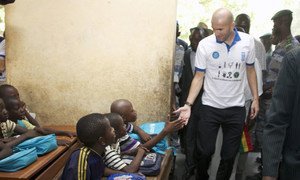