A woman is evacuated from the El Icaco community in Usulután, El Salvador
27 October 2011

Secretary-General Ban Ki-moon today voiced his deep concern at the number of lives affected and damage caused by the recent floods in El Salvador as he met with the country’s First Lady.

During their meeting at UN Headquarters, Vanda Pignato, who is also Secretary for Social Inclusion of El Salvador, briefed the Secretary-General on the loss of life and the devastating impact of the recent disaster, which placed in stark relief the effect of climate change on Central American countries, according to information released by Mr. Ban’s spokesperson.

Nearly 70 per cent of the country has been affected by the heavy rains that also continue to cause severe flooding across Guatemala, Nicaragua, Honduras, and Belize.

Mr. Ban expressed concern that 300,000 people had been directly affected by the storms in El Salvador and more than 1 million others indirectly affected, that the country’s agricultural crops and infrastructure had been seriously damaged, and that reconstruction efforts would require $1.5 billion – equivalent to five per cent of the country’s gross domestic product (GDP).

He commended the country’s disaster management efforts while expressing the hope that the international community would respond strongly to its appeals for emergency and reconstruction assistance.

The Government and the UN launched a $15.7 million flash appeal on Tuesday with the aim of assisting 300,000 people in the next six months.

The appeal focuses on providing shelter, drinking water, food and health services as well as actively monitoring the country’s two principal volcanoes, given the concern about possible mudslides and seismic movements in populated areas, including San Salvador, the capital.

♦ Receive daily updates directly in your inbox - Subscribe here to a topic.
♦ Download the UN News app for your iOS or Android devices.
Salvador

El Salvador a model for others, Ban Ki-moon says on 15th anniversary of peace accords 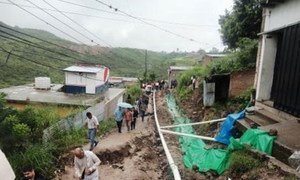 United Nations aid agencies are ramping up their efforts to provide shelter, food and health care to El Salvador, which is facing one of the greatest disasters in its history as heavy rains continue to cause severe flooding across Central America.