The United Nations peacekeeping mission in Côte d’Ivoire today encouraged all candidates who are interested to register for the legislative elections scheduled for 11 December as part of the ongoing efforts to restore peace and stability.

The country’s Independent Electoral Commission (IEC) has extended the deadline until 31 October for the registration of candidates for the upcoming polls, the first to be held since the end of the post-electoral crisis that followed last year’s presidential election.

Hamadoun Touré, spokesperson for the UN Operation in Cote d’Ivoire (UNOCI), told a news conference in the commercial capital, Abidjan, that political parties, groupings and all those interested in contesting the legislative elections should “seize the opportunity” of the extended deadline for registration to present their candidature to the IEC.

UNOCI also called on Ivorian political parties to guarantee that the process is inclusive, according to a news release issued by the mission.

Mr. Touré reaffirmed the mission’s availability to assist the national bodies, namely the IEC and the Government, to carry out the key stages of the electoral process, while noting that one of the main challenges will be logistics.

This issue and other topics were discussed today in a meeting between Secretary-General’s Special Representative and head of UNOCI, Bert Koenders, and the Ivorian Foreign Minister, Daniel Kablan Duncan.

“The aim of this meeting was to reaffirm his determination to support the ongoing efforts to establish peace in the country, by restoring security and re-establishing the rule of law, ensuring respect for human rights and organizing legislative elections,” Mr. Touré said.

On arrival at the mission earlier this week, Mr. Koenders urged political leaders and all Ivorians to commit to work together to ensure stability and national unity, adding that he would do his utmost to support the process of reconciliation.

As part of its efforts to support the preparations for the legislative elections, UNOCI carried out some 1,300 air and ground patrols during the past week. In addition, the mission provides security for and facilitated the movement of several humanitarian organizations working in the country.

The legislative elections are among a number of key post-crisis tasks facing the country that also include the restoration of law and order, national reconciliation and economic recovery. 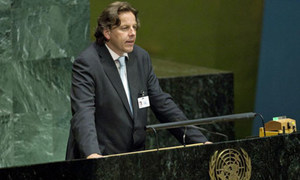 The new United Nations envoy to Côte d’Ivoire today urged political leaders and all Ivorians to commit to work together to ensure stability and national unity, saying he would do his utmost to support the process of reconciliation.