“I’ve been able to see for myself how these simple machines can make women’s everyday lives easier, and generate economic and social development that benefits everyone in the community,” said Mr. Zidane, a Goodwill Ambassador for the UN Development Programme (UNDP), who also visited a UNDP-supported women-run shea butter factory.

“It would be fantastic if every village in Mali could have one of these machines,” he added on a visit to Koursalé, 60 kilometres southwest of the capital, Bamako, noting that over 1,000 villages in Mali are equipped with the technology, reducing the amount of time local women spend on household chores.

The programme has so far reached about 1.5 million people in Mali, and some 3 million in West Africa now have better energy access through the engines, some of which run on biofuels such as the Jatropha vegetable oil.

It focuses on women with low income and minimal access to energy. Only registered women’s associations, with support of village members, can apply for a unit. Once trained, they save an average of between two and six hours daily using the technology.

Improving access to energy for some of the world’s poorest populations is part of UNDP’s poverty reduction strategy, which involves supporting governments in drawing up and putting into action policies that break poverty cycles and create opportunities for women.

In Bamako, Mr. Zidane participated in a sports event with 3,000 youths as part of an advocacy effort for the Millennium Development Goals (MDGs), eight internationally-agreed goals that seek to slash poverty, hunger, lack of access to health care and education, and a host of other ills, all by 2015.

UNDP acting Resident Representative Maurice Dewulf hailed Mr. Zidane as a “valuable Ambassador who has teamed up with 13 million Malians with a view to achieving the MDGs.”

Prior to his departure on Friday, Mr. Zidane met with Mali’s President Amadou Toumani Touré, who acknowledged the football star’s commitment to advocating against poverty.

Together with soccer great Ronaldo Mr. Zidane has been organizing charity games as a UNDP Goodwill Ambassador for the past eight years.

♦ Receive daily updates directly in your inbox - Subscribe here to a topic.
♦ Download the UN News app for your iOS or Android devices.
zidane 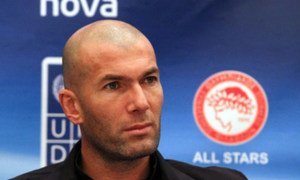 The soccer ace and Goodwill Ambassador for the United Nations Development Programme (UNDP), Zinédine Zidane, will travel to Mali next week to highlight the country’s progress in the effort to alleviate poverty.