General Assembly calls again for end to US embargo against Cuba

The General Assembly today renewed its call, for the 20th consecutive year, for an end to the economic, commercial and financial embargo imposed by the United States against Cuba for the past half century.

In a resolution adopted by 186 votes in favour to two against (Israel and the US) and three abstentions (Federated States of Micronesia, Marshall Islands and Palau), the Assembly reiterated its call to all States to refrain from promulgating and applying laws and measures not conforming with their obligations to reaffirm freedom of trade and navigation.

It also urged them to repeal or invalidate such laws and requested the Secretary-General to report on the implementation of the resolution at the Assembly’s next session, which begins in September 2012.

Introducing the text, Bruno Rodríguez Parrilla, Foreign Minister of Cuba, stated that the US has never hidden the fact that the objective of the embargo – which he said has caused more than $975 billion in damage to the Cuban people – is to overthrow his country’s Government.

“What the US Government wants to see changed will not change,” he stated, declaring that the Cuban Government will continue to be “the government of the people, by the people and for the people.

“Our elections shall not be auction sales. There shall not be $4 billion electoral campaigns nor a parliament supported by 13 per cent of voters,” he added.

The US representative, Ronald Godard, said that for yet another year, the Assembly is taking up a resolution designed to confuse and obscure.

“But let there be no confusion about this: the United States, like most Member States, reaffirms its strong commitment to supporting the right and the heartfelt desire of the Cuban people to freely determine their future.

“And let there be no obscuring that the Cuban regime has deprived them of this right for more than half a century,” he stated.

Mr. Godard added that the economic relationship between the US and Cuba is a bilateral issue and is not appropriately a concern of the Assembly.

“The embargo represents just one aspect of US policy towards Cuba whose overarching goal is to encourage a more open environment in Cuba and increased respect for human rights and fundamental freedoms, principles to which this Organization is also dedicated,” he said. 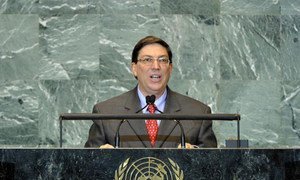 A “preventive war” is taking place in Libya using the protection of civilians as a pretext to plunder the country’s resources, Cuba’s Foreign Minister told the General Assembly’s annual general debate today, calling for Libyans to be left alone to decide their destiny.