Human rights defenders continue to be harassed, attacked, killed and ‘disappeared’ around the world more than a decade after the adoption of an international declaration meant to protect them, a United Nations expert warned today.

In her report Ms. Sekaggya stressed that despite some progress since the adoption of the Declaration on Human Rights Defenders by the Assembly in December 1998 after 14 years of negotiation, many countries continue to pass laws and regulations that restrict human rights activities, and even where efforts are made to adopt legislation in line with international standards, ineffective implementation often remains a problem.

She called on States to refrain from stigmatizing human rights defenders, to recognize the role they play, including women defenders and those working on women’s rights or gender issues, and to ensure that abuses by State and non-State agents are promptly and impartially investigated and that those responsible adequately punished.

States should adopt national laws on the protection of defenders, with a specific reference to the work of women human rights defenders, she wrote.

With regard to the right to freedom of assembly States should favour regimes of notification rather than authorization of assemblies and when authorization is required, States should make sure that it is provided in accordance with the principle of non-discrimination. All allegations of indiscriminate and/or excessive use of force by law enforcement officials should be properly investigated and appropriate action taken against those responsible,” Ms. Sekaggya said.

She stressed that States should not interfere with the internal management or activities of non-governmental organizations (NGOs), which should be allowed to carry out collective activities without having to register.

States should also refrain from intimidation or reprisals against defenders who have sought to cooperate or have cooperated with UN human rights bodies, protect those who wish to cooperate, and end impunity for perpetrators of violence against those have sought such cooperation.

Last Friday Secretary-General Ban Ki-moon made the same point at a high-level panel debate on the issue. “Such attacks and intimidation challenge one of the pillars of this Organization's global mission,” he said. “Around the world, many brave women and men have placed themselves in considerable peril to help the United Nations uphold fundamental human rights.

“Perhaps they have witnessed grave crimes and violations. Or perhaps, by virtue of their positions in government or society, they can see how corruption is subverting justice and undermining institutions. Whatever the circumstances, all too often they can face tremendous risk in deciding to come forward with what they know in the name of upholding human rights.

“They face discrimination and the loss of jobs. They risk violence against themselves and their families. In the most appalling cases, they are murdered. Defending these defenders is a global issue which requires determined efforts by all States.”

Turning to the right to protest, Ms. Sekaggya called on States to take all necessary measures to protect defenders during demonstrations, refrain from excessive force against protesters, and hold officials accountable for their actions.

Among those specifically singled out for protection she cited women defenders, those working on lesbian, gay, bisexual and transgender rights, student activists, trade unionists, and defenders and journalists monitoring demonstrations.

♦ Receive daily updates directly in your inbox - Subscribe here to a topic.
♦ Download the UN News app for your iOS or Android devices.
human rights defenders 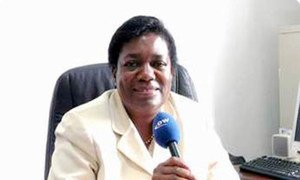 In an effort to strengthen protection for human rights defenders across the world, a United Nations independent expert today launched guidelines outlining their rights as enshrined in the UN declaration on the rights of those who defend the human rights of others.