“Global problems demand global solutions,” Mr. Ban said in a message for United Nations Day, marking the anniversary of the day the Organization was founded 66 years ago. “They compel all nations to unite in action on an agenda for the world’s people. That is the very mission of the United Nations.”

He noted that this year has been particularly dramatic with people everywhere standing up to demand their rights, even as fear continue to grip many who believe that their governments and the global economy can no longer deliver for them.

“In these turbulent times, there is only one answer – unity of purpose,” said the Secretary-General, emphasizing that the UN was needed more than ever to build a better world, and to support poorest and most vulnerable to enhance global peace and social justice.

“In our increasingly interconnected world, we all have something to give and something to gain by working together. Let us unite, seven billion strong, in the name of the global common good,” he added.

Addressing students at New Explorations into Science, Mathematics and Technology School (NEST) in New York, Mr. Ban spoke of the need to find solutions to the problems that bedevil communities, especially in poorer regions of the world.“The one billion people who go to bed hungry. Those who die of hunger… of disease – often because they lack something as basic and simple as clean water. Many of them do not even live to be five years old. At the UN, these are the people we are working for every day.”

He reiterated that in one week, the world’s population will hit the seven-billion mark and challenged the youngsters to get involved and support the UN in its endeavours to make the world a better place.

“Despite all of our challenges, I have hope. Because there is one resource that can overcome all of these problems. I am not talking about a super variety of rice to feed the planet… or a magic cure to all diseases… or a great business idea to end global poverty.

UN Day was marked with various activities in UN offices and missions around the world, including in Sudan’s troubled region of Darfur, where entertainer Omer Ihsas launched a new song dedicated to peace and the UN-African Union peacekeeping force in Darfur (UNAMID) held military and police parades.

The Day was also an occasion to pay tribute those who have lost their lives in the service of the Organization. UNAMID units in El Fasher, Nyala, El Geneina and Zalingei marked the day with various activities.

“On this UN day, we salute not only the UN as an institution, but also the people who are at its heart,” said Ibrahim Gambari, the UNAMID Joint Special Representative, addressing a gathering at El Fasher stadium.

In Iraq, the Secretary-General’s Special Representative Martin Kobler told a gathering in Baghdad that the world body had successfully implemented a range of political, development, humanitarian and emergency initiatives in the country.

“Most importantly, we have been doing this while promoting key cross-cutting issues – in particular human rights protection, gender, and the environment,” he said.

The UN Interim Force in Lebanon (UNIFIL) marked the Day with the presentation of certificates of recognition to eight Lebanese staff members who have completed 30 years of service with the mission by the mission’s Force Commander Major-General Alberto Asarta Cuevas.

“On this day, let us all pledge to stand firmly united by the ideals that led to the creation of the United Nations 66 years ago and which today, in our changing world, remain an anchor of hope to achieve lasting peace, security and development for all mankind,” said Maj.-Gen. Asarta.

In Thailand, where UN Day coincided with the 62nd anniversary of the Organization’s presence in the country, UN and Thai Government officials came together to mark the Day.

“Bangkok has transformed in many ways – not only in its growth as the capital of our dear nation, but also as a geographic, commercial and political hub,” said Princess Maha Chakri Sirindhorn of Thailand.

Noeleen Heyzer, the head of ESCAP thanked Thailand for hosting the UN. “You have given Asia-Pacific a regional United Nations presence to build our collective strengths, to share regional solutions, to implement the founding ideals of the United Nations, to build a more inclusive, sustainable and just future for our people,” she said.

♦ Receive daily updates directly in your inbox - Subscribe here to a topic.
♦ Download the UN News app for your iOS or Android devices.
global+challenges 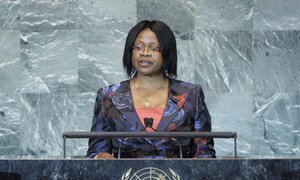