As the world prepares to welcome its 7 billionth inhabitant next week, Secretary-General Ban Ki-moon today stressed the need to achieve a future for the entire human family that is free of nuclear weapons.

“We know that the world of tomorrow is shaped by the decisions we make today. A world free of nuclear weapons is a concrete possibility,” Mr. Ban said in remarks to a nuclear disarmament conference in New York organized by the EastWest Institute.

“Let us realize that dream so that 7 billion people can live in peace and security,” he added.

Mr. Ban has made nuclear disarmament and non-proliferation a top priority, and put forward a five-point plan in 2008 that includes recommendations on increasing security, verification, establishing a legal framework for nuclear disarmament, transparency and conventional weapons.

He cited the need to advance recent progress in the field of disarmament, beginning with a deeper reduction in the largest nuclear arsenals.

“This should include limits on both non-strategic nuclear weapons and non-deployed weapons. And by weapon reduction, I mean weapon destruction,” Mr. Ban told participants.

“We need a significant improvement in transparency,” he continued. “Too little is known about existing stockpiles of weapons, fissile materials and delivery systems.”

He also emphasized the need to strengthen the rule of law in disarmament, including the elaboration of the legal obligations needed to achieve nuclear disarmament, such as the contents of a future nuclear weapons convention.

Other steps include bringing into force as soon as possible the Comprehensive Nuclear-Test-Ban Treaty (CTBT) and advancing rule of law issues within the Conference on Disarmament.

“For too long, this vital body has been paralyzed by differing priorities,” he said. “It is stumbling into irrelevance. This does credit to no one. It must fulfil its responsibility to act.

“As we look ahead, we must keep our eyes fixed on our universally agreed ‘ultimate goal’ of general and complete disarmament,” he added.

The Secretary-General also highlighted the important work done by various partners to advance the disarmament agenda. “The future of nuclear disarmament rests on many shoulders: nuclear-weapon States, the international diplomatic community, and, of course, a robust collective effort by civil society,” he stated. 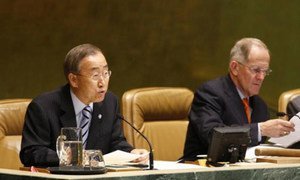 Secretary-General Ban Ki-moon said today that the world’s sole multilateral disarmament negotiating forum remains deadlocked and suggested ways to break the stalemate, including the appointment of a panel of eminent persons, the creation of an ad hoc committee of the General Assembly or a United Nations conference.