The Democratic People’s Republic of Korea (DPRK) cannot feed its people for the “foreseeable future,” the United Nations relief chief reported today, urging the world to step up humanitarian support and not “turn our backs” on a population where an estimated six million people now depend on food aid.

“New solutions are needed if we are to see an end to this chronic, seemingly never-ending crisis,” she told a press briefing in Beijing, held immediately after her departure from the DPRK.

She found that steadily deteriorating living conditions since the mid-1990s meant many people in the DPRK were increasingly vulnerable.

“Those least able to cope are now much more likely to be affected by any shock that upsets the very fragile support systems that the Government has in place, like the PDS [public distribution system] and an outdated and poorly resourced health system. When the PDS cannot provide enough food, there are few ways for vulnerable people to cope beyond the now very limited international assistance that is being provided.”

Under the PDS, daily rations fell from 400 grams per person in March to about 200 grams in July, and have stayed at that level ever since.

Malnutrition rates, especially among children, are high, Ms. Amos said, due to the lack of food and the poor nutritional mix – many people subsist on maize and cabbage, with rice as well sometimes if they are lucky. The chronic malnutrition rate for children under the age of five has reached 33 per cent nationwide.

“A large number of children in the country are stunted,” she stressed. “Chronic malnutrition will have long-term implications for generations to come, even if drastic action is taken today. Travelling around the country, one cannot help but notice that people – children and adults alike – are generally short and thin.”

The country also does not have enough arable land to produce the food it needs, due in part to degraded soil and a lack of fertilizer and quality seeds, despite Government efforts to improve access.

Frequently poor weather conditions are another factor, and Ms. Amos – who is also the Under-Secretary-General for Humanitarian Affairs – noted that this year floods have been blamed for a shortfall in harvests.

“If we look back over the last few years, more often than not a severe weather event has occurred in DPRK. This country cannot be food self-sufficient in the foreseeable future,” she said.

“Small changes, like giving greater support to kitchen gardens, which assessments have shown help to improve nutrition, would be a good first step.”

Ms. Amos said the Government in Pyongyang must “lead the humanitarian effort, not be an onlooker. As in other countries, the responsibility for the care of the people rests with the Government; our job as international humanitarian actors is to provide support.”

During her meetings with Government officials, she underlined the need for them to share data and information to show donors and the broader international community what the key challenges are and that their money is being well spent.

“I made clear that the quality of international support will rest on the credibility of the information that we are able to provide, particularly on humanitarian needs and how donor money is being used.”

Ms. Amos said “the most vulnerable people are victims of a situation that they have no control over, and find themselves in distress through no fault of their own. For this reason, we are not in a position to turn our backs on the people of the DPRK.” 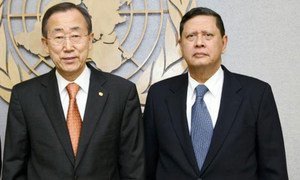 A United Nations expert today called for a two-pronged approach to tackle the food crisis in the Democratic Republic of Korea (DPRK), urging the international community to step up its efforts to provide aid to the country and the Government to overcome its flaws in its food distribution system.