The United Nations human rights office today called for a probe into Muammar Qadhafi’s death to determine whether he was killed during fighting or after his capture.

The circumstances surrounding the ex-Libyan leader’s death yesterday in his hometown of Sirte are unclear, with four or five different versions of how he died, noted the Office of the High Commissioner for Human Rights (OHCHR).

“There are at least two cell-phone videos, one showing him alive and one showing him dead. Taken together, these videos are very disturbing,” Rupert Colville, OHCHR’s spokesperson in Geneva, told reporters.

“We believe there is a need for an investigation and more details are needed to ascertain whether he was killed in the fighting or after his capture,” he added.

Mr. Qadhafi’s death and the fall of Sirte and Bani Walid bring an end to eight months of violence and suffering for the Libyan people as Government forces and rebels battled since the start of the pro-democracy movement earlier this year.

Secretary-General Ban Ki-moon yesterday called on all sides in Libya to lay down their arms and work together peacefully to rebuild the North African nation amid the news of Qadhafi’s death.

“Clearly, this day marks an historic transition for Libya,” Mr. Ban stated, while adding that it is only the start of the process to achieve democracy and national reconciliation. “The road ahead for Libya and its people will be difficult and full of challenges,” he pointed out.

Mr. Colville said “a new era” is now beginning in Libya, which should respond to the aspirations of the people for democracy and human rights.

“For this to become a reality, human rights must be the cornerstone of all policies and actions, and people must have the chance to have a real say in determining the future of their country,” he stated.

Mr. Colville added that the thousands of victims who suffered loss of life, disappearance, torture and other serious human rights violations over the past eight months, as well as throughout his long rule, have the right “to know the truth, to see the culture of impunity brought to an end, and to receive reparations.”

“It will be essential for alleged perpetrators to be brought before trials, which adhere to international standards for fair trial, and for victims to see that accountability has been achieved,” he stated.

The President of the General Assembly, Nassir Abdulaziz Al-Nasser, for his part, urged Libyans to unite and reconstruct their country through a process based on reconciliation, justice, and respect for human rights and the rule of law.

In a statement issued by his spokesperson, Mr. Al Nasser expressed his sincere condolences to all Libyans who have lost their loved ones in the conflict, and encouraged Member States to continue supporting the country as it embarks on reconstruction, stabilization and democratization.

He reaffirmed that democratic reforms will need to be coupled with economic transformation to raise people’s living standards through job creation.

Meanwhile, the UN High Commissioner for Refugees (UNHCR) said today that, effective Sunday, newly arriving third-country nationals from Libya at Egypt’s Saloum border will not be processed for resettlement. Saloum has been one of the main sites over recent months for people fleeing the crisis in Libya.

“The decision to halt further resettlement out of Saloum is based on a marked improvement in the situation in eastern Libya, and because UNHCR is refocusing its protection and assistance efforts inside Libya,” said the agency’s spokesperson, Andrej Mahecic.

He told reporters in Geneva that people already at Saloum will not be affected and work will continue on finding solutions for them, including resettlement for those found to be refugees.

Since the start of the conflict in Libya in February, 37,866 third-country nationals have been evacuated from Saloum by UNHCR and the International Organization for Migration (IOM).

As of 20 October, there were 1,816 people still at Saloum, approximately half of whom have been submitted for resettlement and most others awaiting the completion of refugee status determination. 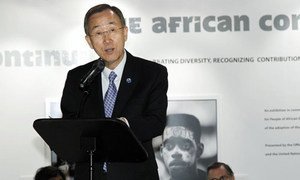 Secretary-General Ban Ki-moon today called on all sides in Libya to lay down their arms and work together peacefully to rebuild the North African nation amid reports that Colonel Muammar al-Qadhafi has been killed.