The United Nations human rights expert on extrajudicial, summary or arbitrary executions stressed today that States must respect international standards on the use of lethal force during arrests, and cautioned over the emerging trend of using unmanned aircraft to kill suspects.

“International standards provide adequate room for States to pursue their legitimate security interests, both at home and abroad,” said Christof Heyns, the Special Rapporteur, presenting his report to the General Assembly on the use of force by law enforcement officers during arrest or situations where arrest is a reasonable possibility.

“Abusing them to meet short-term needs, especially in counter-terrorism operations, could do long-term damage to the protection of human rights.” Life may be taken away by the State only as a way of protecting other lives, he added.

Mr. Heyns presented to the Assembly the results of a review of national legislation dealing with arrests in more than 100 countries.

He emphasized that in many countries, the test of whether a fleeing suspect may be shot still relates only to the severity of the offence committed and not to the potential harm that the person in question holds for society at large.

“While it is correct that lethal force should not be used unless there is a reasonable suspicion that the suspect has committed a crime involving serious violence, or has threatened to do so, that is not enough.

“For deadly force to be used by the police, there must be an immediate or ongoing threat to the public if the person were to escape.”

Firearms, he said, should not be used to stop a suspected thief, or someone who has committed a crime of passion and does not pose an ongoing threat, Mr. Heyns noted.

On targeted killings, the Special Rapporteur said the current use of drones and raids into countries where there is not a recognized armed conflict to kill an opponent, such as in Pakistan or Yemen, is highly problematic

While such operations may be designed to hit a particular target, civilian casualties remain, and it is used on such a large scale that it can hardly be described as targeted.

“The use of such methods by some States to eliminate opponents in countries around the world raises the question why other States should not engage in the same practices. The danger is one of a global war without borders, in which no one is safe,” stressed Mr. Heyns.

He called on the international community to engage in a serious debate on how to deal with the emerging and dangerous trend.

♦ Receive daily updates directly in your inbox - Subscribe here to a topic.
♦ Download the UN News app for your iOS or Android devices.
heyns 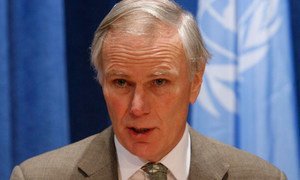 A United Nations independent human rights expert today sounded the alarm about the practice of targeted killings, saying it had a tenuous legal basis and could undermine the rules that aim to prevent extrajudicial executions and guarantee people the right to life.