In Cambodia, UN legal chief warns on interference in work of genocide tribunal

The United Nations legal chief today strongly urged the Cambodian Government to refrain from interfering in any way with the judicial process relating to the United Nations-backed tribunal set up to try those accused of the worst crimes under the notorious Khmer Rouge regime in the late 1970s.

Patricia O’Brien, the UN Legal Counsel, met with Cambodia’s Deputy Prime Minister Sok An in Phnom Penh, the capital, to discuss recent developments at the tribunal, known as the Extraordinary Chambers in the Courts of Cambodia (ECCC).

Last week Judge Siegfried Blunk, the international co-investigating judge at the ECCC, resigned from the tribunal. He cited repeated statements by senior Government officials opposing the progress of what are known as Cases 003 and 004 – which concern senior Khmer Rouge officials suspected of being responsible for the deaths of thousands of people.

In a statement issued after her meeting with the Deputy Prime Minister, Ms. O’Brien voiced concern about recent developments at the ECCC and reiterated the UN’s call on everyone to respect the integrity and independence of the tribunal’s judicial process.

“The Legal Counsel strongly urged the Royal Government of Cambodia to refrain from statements opposing the progress of Cases 003 and 004 and to refrain from interfering in any way whatsoever with the judicial process,” the statement noted.

“She emphasized the obligation of the Royal Government of Cambodia to cooperate fully with the ECCC.”

The tribunal, which uses a mixture of Cambodian and foreign judges and personnel, is tasked with trying those alleged responsible for mass killings and other crimes committed under the Khmer Rouge, which ruled Cambodia between 1975 and 1979. Up to three million people died under the regime in what is widely recognized as genocide. 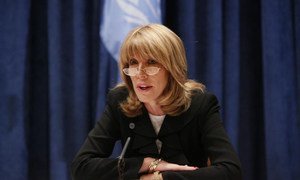 The United Nations Legal Counsel will travel to Phnom Penh next week for meetings concerning the Cambodia genocide tribunal in the wake of the resignation of one of the judges.