Secretary-General Ban Ki-moon today called on all sides in Libya to lay down their arms and work together peacefully to rebuild the North African nation amid reports that Colonel Muammar al-Qadhafi has been killed.

“Clearly, this day marks an historic transition for Libya,” Mr. Ban said at UN Headquarters in New York, reacting to the reports of the death of the Libyan leader and the end of fighting in Sirte and other cities.

“In the coming days, we will witness scenes of celebration, as well as grief for those who lost so much,” he stated. “Yet let us recognize, immediately, that this is only the end of the beginning. The road ahead for Libya and its people will be difficult and full of challenges.”

Pro-Qadhafi forces and rebels have been engaged in fighting for months after a pro-democracy movement emerged at the start of the year, similar to the popular uprisings witnessed in other parts of the Middle East and North Africa.

Mr. Ban stressed that now is the time for all Libyans to come together, and that they can only realize the promise of the future through national unity and reconciliation.

“Combatants on all sides must lay down their arms in peace,” he said. “This is the time for healing and rebuilding, for generosity of spirit – not for revenge.”

As Libya’s transitional authorities prepare the way for elections and take the many other steps toward building their new nation, “inclusion and pluralism must be the watchwords,” he added.

In a separate statement, Mr. Ban paid tribute to the Libyan people for their steadfastness and courage through all the pain they endured, and conveyed the condolences of the UN to the families of those who gave their lives in the struggle for freedom.

“Libya now closes a painful and tragic chapter and starts a new one based on national reconciliation, justice, respect for human rights and the rule of law,” he stated, adding that “the road ahead is full of challenges, but also opportunities.”

The UN began deploying staff last month to its newly established UN Support Mission in Libya (UNSMIL), headed by the Secretary-General’s Special Representative, Ian Martin. The mission, based in the capital, Tripoli, will assist the authorities in restoring public security, plan for elections and ensure transitional justice.

Mr. Martin, speaking to reporters in New York via video-link from Tripoli, said that today is indeed an historic day and probably “the key moment of the transition.”

He said that as soon as the National Transitional Council (NTC) formally declares liberation, the path will begin towards the formation of an interim government, elections for a national council as a basis for a government with full democratic legitimacy and the drafting of a new constitution.

“It’s the people of Libya who have made their revolution and it’s the Libyan people, with youth and women very much at the fore, who will lead on the way ahead,” he stated. “But they have asked the United Nations to play a significant role in assisting them.”

Mr. Martin emphasized that, amid the celebration, no one should underestimate the scale of the challenges that lie ahead for Libya. He noted that there are many who have been bereaved, many others who have been seriously maimed and injured, as well as those who are traumatized not just by what has happened during the current fighting but by torture, disappearances and extrajudicial executions during the years of the Qadhafi regime.

At the same time, he stated that Libya is a country now which has a very strong sense of the values of human rights, democracy, accountability and transparency, precisely because these are the opposite of what has been experienced for so long.

“And it’s those values, United Nations values, that we will do our best to assist them in realizing.” 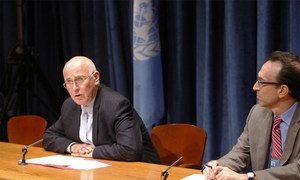