The UN Office for the Coordination of Humanitarian Affairs (OCHA) said that a grant of $50,000 has been approved to support initial relief activities in El Salvador, where floods have claimed 32 lives and caused the evacuation of more than 32,000 people. The country appealed for international assistance on Sunday.

The floods have also hit Costa Rica, Honduras, Guatemala, Nicaragua and Mexico, according to OCHA.

In Guatemala, 29 people have died and an estimated 154,000 have been affected, while more than 38,000 people in Honduras have been stricken by the inundations, with 13 reported deaths.

In Nicaragua, 133,858 people have been affected, mainly in the north and the Pacific coastal areas. Of particular concern in Nicaragua are reports of new cases of H1N1 viral infections that have prompted the UN World Health Organization (WHO) to send in a monitoring team.

The Government has also requested international assistance and OCHA’s regional office will deploy extra staff to assist the UN Resident Coordinator and humanitarian country team, in addition to the a six-member team from the UN Disaster Assessment and Coordination (UNDAC) already there.

Flood damage has been reported in Costa Rica and Mexico, but the rains have been less intense in those two countries.

Shelter for flood-battered Colombians to be built with emergency funding, UN says 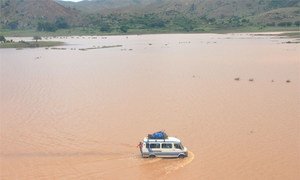 Some 100,000 people hit by rains, floods in Mexico and Central America – UN

Some 100,000 people in Mexico and Central America are facing flooding as Hurricane Jova and a tropical depression unleash torrential rains over the region, the United Nations reported today as it activated emergency and assessment teams in Nicaragua and El Salvador.