United Nations agencies tasked with tackling global hunger today highlighted the need for concerted efforts to address the root causes, focusing on the need to ensure that children have enough to eat, and addressing the factors that make food unaffordable for so many.

To mark the annual World Food Day, which falls on Sunday, the UN Food and Agriculture Organization (FAO) noted that price fluctuations, especially upswings, are a major threat to food security in developing countries, where the poor are particularly hard hit.

FAO chose the theme of ‘Food Prices – From Crisis to Stability’ for this year’s Day to shed light on the trend and what can be done to mitigate its impact on the most vulnerable.

“Greater policy coordination in international food trade can reduce volatility by helping maintain an assured flow of goods. FAO supports the multilateral negotiations under the World Trade Organization and the elimination of trade-distorting agricultural subsidies in rich countries,” according to the agency’s information note.

On food commodities speculation, FAO research suggests that while it might not trigger price movements, it could exaggerate their size and duration.

Mitigating the effects of price volatility, national or regional safety nets, possibly featuring emergency food reserves, can help ensure food supplies to needy and vulnerable groups during crises, according to FAO. Poor consumers can also be assisted with cash or food vouchers and producers helped with inputs such as fertilizer and seeds.

The UN World Food Programme (WFP), for its part, is marking the Day with an effort to connect the lives and dreams of hungry children in developing countries with activists and supporters who are in a position to help them, through a new online platform.

“Good nutritious food is the very foundation of healthy children and nations. It is time for us to end hunger and malnutrition among children once and for all,” said Josette Sheeran, the WFP Executive Director.

“But many children never get to realize their ambitions. Good nutrition provides the basic foundation for a better future. The onus is on all of us to mobilise the resources and awareness to make the dreams of every child come true.”

WFP also launched its “Feed a Child, Feed a Dream,” initiative ahead of World Food Day to provide a glimpse into the lives and aspirations of some of the children around the world who are receiving food from the agency, and to demonstrate how easy it is to help.

Visitors to www.wfp.org/dreams can meet children such as Guilaye of Senegal who likes talking about football during his school breaks, and aspires to be president, or Shiva from India, who is scared of nothing but snakes, and wants to become a sweetshop owner.

The platform also invites visitors to share their dreams of what they wanted to be when they were children, and to provide a donation that can feed a child for as little as 25 cents a day.

“It’s heart-warming to hear what each of these children want to achieve in their lives, and inspiring to help them dream big,” said Ms. Sheeran. “When I was young, I dreamed of helping build a better world. Each and every one of these children is our future – we owe them the basic right to be free from hunger,” she added.

In a related development, WFP and LG Electronics have unveiled an innovation in digital technology to help in the fight against hunger.

On the latest LG Smart TVs, which combine the advanced technology of Internet-linked television, owners will have access to an application that allows them to directly participate in global efforts to achieve Millennium Development Goal (MDG) 1, which calls for the eradication of extreme poverty and hunger. The launch of the application will take place during World Food Week, which runs from Monday until 23 October.

“This partnership allows us to use LG’s cutting edge technology to make a dent in the biggest global social problem of our time – world hunger,” said Nancy Roman, the WFP Director of Communications, Public Policy and Private Partnerships. “With this app, we can reach new audiences and enlist their support for this crucial work.”

The Smart TV application will allow owners to donate to WFP through the WeFeedback campaign, the agency’s social media tool that encourages users to make a difference in the lives of hungry schoolchildren. 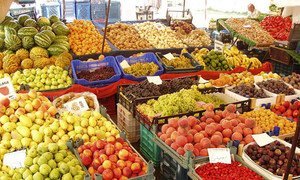 The United Nations agencies working to combat hunger today called for action to ensure long-term food security as a new report shows that high food prices are likely to continue and possible increase over the next decade.