More than 550,000 children in some of the most vulnerable districts of Iraq will benefit from a United Nations-backed school feeding programme that seeks not only to improve their nutrition but also to encourage poor families to send their children to school in the first place.

The joint programme launched by the UN World Food Programme (WFP) and the Iraqi education ministry will provide a fortified midday snack to primary schoolchildren at some 1,800 schools in 24 districts over the 2011-2012 academic year.

“WFP’s vision is to reduce hunger among school children so that it is not an obstacle to their development,” WFP Country Representative Edward Kallon said in a news release today. “School feeding programmes act as a safety net in support of vulnerable schoolchildren and their families and contribute to breaking the intergenerational cycle of chronic hunger through better access to education, better learning and better nutrition and health.”

While Iraq is considered as a middle-income country, decades of war and instability have degraded infrastructure and basic social services, leaving many people poor and vulnerable. Some 7.5 million Iraqis live under the poverty line of $2 a day.

“One of the most urgent issues is to reduce the drop-out rate as it has become a serious problem especially in primary schools,” Education Minister Muhammad Tamim said.

One of the children targeted during the pilot phase of the programme in Baladrooz district in Diyala governorate said the fortified biscuits were the main reason he returned to school. “Because of the lack of adequate food in my house I left school,” said Akil, who comes from a poor family of five. “Now I no longer have to feel the emptiness in my stomach.”

In August 2010 the Government approved the national school feeding programme to be led by the education ministry. WFP was asked to support implementation and build the ministry’s capacity to manage it. The ministry is planning to take over during the course of next year. 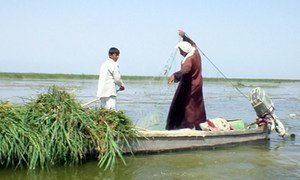 Marshlands in Iraq must be managed in a manner that balances the various benefits derived from the ecosystems, including food and clean water for the country’s people, as well as climate control, according to a United Nations report released today.