“The good news is that some countries have shown how to reduce risk from floods and cyclones,” Mr. Ban said in his message to mark the International Day for Disaster Reduction, which is observed today. “Investments in early warning and other measures are paying dividends.”

To mark the Day, the United Nations International Strategy for Disaster Reduction (UNISDR) and its partners invited children and young people to “Step Up for Disaster Risk Reduction,” saying they were the groups most affected by disasters.

An estimated 100 million young people are affected by reported disasters each year and thousands of them are killed and injured.

“We know from many courageous stories which emerge post-disaster that young people are not passive victims of events beyond their control,” said Margareta Wahlström, the Special Representative of the Secretary-General for Disaster Risk Reduction and head of UNISDR.

“Around the world we have seen the evidence that young people are quick to respond to tragic events,” she said in her message. “There is ample evidence that wherever young people are empowered with information and skills training, they are important actors in disaster management and have a keen eye for where risk can be reduced in the community.”

In Nepal, for example, schoolchildren are taught the basics of building homes safely, while risk reduction and climate change adaptation activities involving children in Cuba are now being emulated in other parts of the world.

At events across the around the world today, and in the next 12 months, UNISDR will work with its partners – the UN Children’s Fund (UNICEF) and non-governmental organizations (NGOs) such as Plan, Save the Children and World Vision – To promote the new Children’s Charter for Disaster Risk Reduction.

In the Charter, children identified five priorities to strengthen resilience in the face of disasters:

“The message is clear: Disaster risk reduction should be an everyday concern for everybody. Let us all invest today for a safer tomorrow,” said the Secretary-General.

According to UNISDR, risk reduction includes disciplines such as disaster management, mitigation and preparedness. It is also crucial for sustainable development.

According to this year’s issue of the UNISDR Global Assessment Report, the proportion of the population living in flood-prone river basins has risen by 114 per cent over the last 30 years and those living on cyclone-exposed coastlines by 192 per cent.

It points outs that, more than half the world’s large cities, with populations ranging from two to 15 million, are located in areas at high risk of seismic activity.

Meanwhile, more than 50 children from 13 countries in the Asia-Pacific region met in Bangkok today to mark the Day and discuss how they can play a more active role in preventing disasters.

Co-organized by the Association of Southeast Asian Nations (ASEAN) Committee on Disaster Management, the Thailand Department of Disaster Prevention and Mitigation, the ASEAN Secretariat, South Asian Association for Regional Cooperation (SAARC), the Asia Pacific Regional Office of UNISDR and other partners, the event highlighted the vital role that children can play in reducing disaster impacts.

“As we have seen in recent days in the newspapers, on television, or with our own eyes on the streets and fields around us, disasters disrupt the lives of millions of children, threatening their rights and their needs,” said Noeleen Heyzer, the Executive Secretary of the UN Economic and Social Commission for Asia (ESCAP).

“Children and young people are particularly vulnerable. An estimated 66 million children are affected by disasters every year, and their vulnerability is expected to increase,” said Dr. Heyzer.

♦ Receive daily updates directly in your inbox - Subscribe here to a topic.
♦ Download the UN News app for your iOS or Android devices.
disaster|risk

Six UN-backed green awards handed out for work in disasters 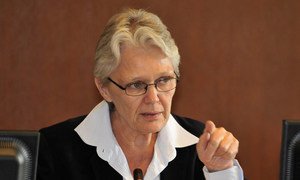