“In 2010, Europe saw the biggest increase in disaster events – plus 18.2 per cent – compared to the decade’s averages,” chief of the UN International Strategy for Disaster Reduction (UNISDR) Margareta Wahlström told participants at a forum yesterday in Skopje, the capital of the former Yugoslav Republic of Macedonia.

“In terms of economic damages, it accounted for 14.3 per cent of reported global disaster losses in 2010, with most of the damages caused by climatological and hydro meteorological events.”

Ms. Wahlström said that although this is cause for concern, there is evidence that European governments are slowly implementing adequate disaster risk reduction measures, and they will have a much greater chance of succeeding at minimizing the costs of natural hazards.

“National reports demonstrate a gradual evolution from a mindset of crisis and response to one of proactive risk reduction and safety. Countries who have or are going to establish national platforms (NPs) for disaster reduction are reporting significant and ongoing success in addressing cross cutting risk reduction issues – more than double compared to those countries without NPs.”

Ms. Wahlström also highlighted Europe’s participation in the 2010-2011 World Disaster Reduction Campaign – Making Cities Resilient: “Europe is the most active region in embracing the campaign: 378 European cities have joined the campaign to improve their resilience and to exchange their experiences and challenges.

♦ Receive daily updates directly in your inbox - Subscribe here to a topic.
♦ Download the UN News app for your iOS or Android devices.
natural disasters 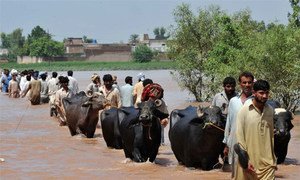 The head of the United Nations disaster risk reduction agency arrives tomorrow in Pakistan to discuss possible measures to reduce the impact and recurrence of major floods, which have inundated much of the Asian country in the past two years.