Scientific and financial resources are needed to counter the growing risks of droughts that all too frequently lead to famine and poverty, the United Nations said today as a conference opened in the Republic of Korea on desertification.

During the two-week session of the Conference of the Parties to the UN Convention to Combat Desertification (UNCCD), taking place in Changwon, representatives of Member States will discuss ways to measure the impact of desertification and mechanisms for assessing and reversing the phenomenon.

According to UNCCD, more than 12 million hectares of productive land are lost to desertification every year, the equivalent of losing an area the size of South Africa every decade.

The loss of productive land is compounded with the need to provide food for the estimated global population of nine billion by 2050, which would require a 70 per cent increase in global food production.

UNCCD stressed that the rapid loss of this natural resource calls for the creation of agreed global scientific measures, and an increase in funding to combat desertification, which is currently limited.

“This convention has now reached a stage where quantifiable medium- and long-term targets should be set, to foster implementation and equip decision makers with adequate tools to effectively monitor the action programmes process,” UNCCD Executive Secretary Luc Gnacadja said.

During the conference’s second week, business leaders from more than 100 companies will participate in a forum to raise awareness about desertification and stimulate investment. The participating companies include Cargill, LG International, Nestle and Unilever. A meeting of government ministers will also take place to discuss critical policy questions.

As part of the conference, UNCCD and the Republic of Korea will propose the Changwon initiative, a series of action plans to foster reforestation efforts in drylands. This is a high priority in Asia as it has more people affected by land degradation and drought than any other continent.

Key messages from the conference, particularly those related to combating desertification to boost green economies, will be shared for inclusion at the Rio+20 UN Conference on Sustainable Development, to be held in Brazil next June. 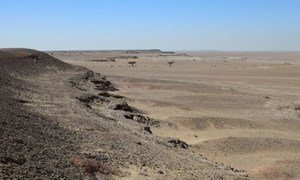 Participants have gathered at a high-level United Nations meeting today to highlight the need for stronger action to protect the world’s drylands, which are home to two billion people, stressing that doing so will help reduce poverty and improve development prospects.