UNEP/GRID-Arendal
The tourism sector contributes around 5 per cent of global greenhouse gas emissions.

10 October 2011
Countries should strengthen their incentives for the tourism sector to reduce their greenhouse gas emissions and adopt environmentally friendly policies as it has the potential to play a key role in combating climate change, according to a United Nations-backed report released today.

Countries should strengthen their incentives for the tourism sector to reduce their greenhouse gas emissions and adopt environmentally friendly policies as it has the potential to play a key role in combating climate change, according to a United Nations-backed report released today.

The report, co-authored by the UN Environment Programme (UNEP) and the Organisation of Economic Co-operation and Development (OECD), warns that emissions from the global tourism industry will double in the next 25 years unless new sustainable policies are developed.

Most of the energy for tourism comes from fossil fuels, with the sector contributing an estimated five per cent to global greenhouse gas emissions. Aviation currently accounts for 40 per cent of tourism’s carbon emissions, car transport for 32 per cent, and accommodation for 21 per cent.

The report stresses the importance not only of mitigating the impact of climate change but of taking measures to adapt to its effects, an aspect which has not received much attention by most countries according to the report’s survey.

The report highlights policies taken by countries such as Austria, Germany, Ireland, and South Africa that show it is possible to identify the future impact of climate change effects, but concludes that these policies are in the initial stages in virtually all countries and need to be developed further.

In particular, the report focuses on the impact that water scarcity will have in the industry as many tourism assets such as lakes, rivers, snow and fresh water will be affected by climate change, resulting in a disruption of the socio-economic environment.

In addition, the report recommends that new policies need to reflect the place of tourism in each country’s economy as whole, and stresses that different measures may be required in each country according to their economy’s structures.

“Policy-makers must find the responses that are most appropriate to their own circumstances,” said Arab Hoballah, Chief of the Sustainable Consumption and Production Branch at UNEP's Paris-based Division of Technology, Industry and Economics.

“This report, which underlines the magnitude of the challenges we face, provides relevant and useful information to that end. There is much to be learned, too, from examples of good practice,” he said.

The report also emphasizes how government policy, industry initiatives and green technologies can help tourism follow a low-carbon, resource-efficient path, which would reduce energy use, greenhouse emissions and water consumption, an issue which will be addressed by world leaders at the UN Sustainable Development Conference – known as Rio+20 – in Brazil next year.

In the run up to Rio+20, tourism’s contribution to sustainable development will only continue to grow, Deputy Secretary-General Asha-Rose Migiro said today in her remarks to the UN World Tourism Organization (UNWTO) ministerial round table in the Republic of Korea.

She said the sector has enormous potential to contribute to achieving the MDGs, but this has yet to be realized. She stressed it can help alleviate poverty, create jobs, and empower women, but also warned against potential pitfalls such as damaging ecosystems and failing to benefit local communities if profits are repatriated overseas.

“We must call on governments and the tourism industry to work in partnership, and to engage with local communities to develop tourism that is pro-poor, community-oriented, and sustainable,” she said. 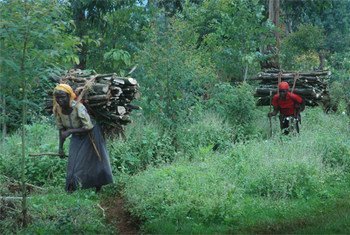 28 September 2011
The increasing demand for ecotourism can play a vital role in saving endangered forests, a United Nations-backed partnership said today, while also warning of the potential damaging effects if its expansion is not effectively managed.