The United Nations peacekeeping mission in Côte d’Ivoire today condemned acts of violence at a political gathering in Abidjan over the weekend and appealed for calm to enable campaigning for the forthcoming legislative elections to proceed in a peaceful atmosphere.

According to media reports, youths armed with sticks attacked a rally organized by the Front Populaire Ivoirien (FPI) party of former president Laurent Gbagbo in Abidjan, the country’s commercial capital, on Saturday, disrupting the meeting.

The UN Operation in Côte d’Ivoire (UNOCI) urged the authorities “to take the appropriate action to find out the truth about the circumstances, nature and extent of the incidents, in order to identify those responsible with a view to taking the required measures in accordance with the law.”

The mission also appealed to the people of Côte d’Ivoire and supporters of all political parties to exercise restraint and work for national reconciliation and the consolidation of peace.

The West African nation is emerging from a crisis that ended in mid-April, when Mr. Gbagbo finally surrendered, ending months of violence in the wake of his refusal to step down after he lost last November’s UN-certified run-off election to Alassane Ouattara, who was sworn in as President in May.

The country now faces a number of key post-crisis tasks, including the restoration of law and order, national reconciliation, the holding of legislative elections, and economic recovery. 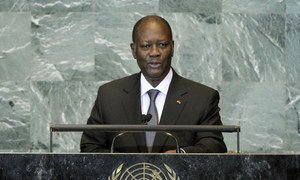 Thanking the United Nations for its role in resolving the electoral crisis after Côte d’Ivoire’s former leader refused to step down, President Alassane Ouattara today highlighted legislative elections later this year as a critical step towards cementing democracy.