Africa’s pace towards development slow and uneven, despite gains – UN

Africa’s overall progress towards achieving the internationally agreed targets to eradicate extreme poverty and accelerate social development has been slow and generally insufficient to meet the 2015 deadline, the United Nations says in a new report unveiled today, noting, however, that there have been small gains.

“The continent continues to make steady, albeit modest progress toward attainment of the MDGs, notwithstanding the adverse effects of the global financial, food and fuel crises.

“Africa’s performance with respect to primary enrolment, gender equality in primary school enrolment, women’s representation in decision-making, child immunization, and stemming the spread of HIV/AIDS and TB [tuberculosis] has been especially strong,” notes the report, which was prepared by the UN Economic Commission for Africa (ECA), the UN Development Programme (UNDP), African Development Bank and the African Union (AU).

Launching the report in New York, Deputy Secretary-General Asha-Rose Migiro said the document was a rich source of information on what has worked and what has not in Africa.

“Our challenge is to translate this knowledge into policies that make a difference in people’s lives. We have to focus on children, youth, women and other vulnerable groups. Governments have to back their pledges with resources. And they have to allocate funding to social services while acting on their commitment to good governance,” she said, urging donors to complement national efforts by scaling up their support.

Countries recovering from conflict have also made tremendous progress in reducing mortality rates among children under the age of five. “These developments, particularly in post-conflict and fragile States, suggest that with political will, adequate resources, and strengthened governance structures, the MDGs can be achieved even under very difficult circumstances.”

Africa is, however, not doing well in key poverty-reduction indicators such as creating productive employment and reducing hunger and malnutrition, and favourable trends were reversed by the global economic shocks. The absolute number of the working poor is on the rise, the report points out, with more than one out of every two workers living in poverty, meaning that they earn less than $1.25 per day.

High youth unemployment, particularly among female youth in North Africa, is another growing area of concern. There has been overall progress in gender equality and women’s empowerment, but the continent is off-track on achieving gender parity at the secondary and tertiary levels of education.

Progress on health indicators, including lower child mortality rates and higher immunization coverage, has been encouraging, but insufficient to achieve the intended targets by 2015.

Access to reproductive health is limited but improving steadily, although only one in five married women between the ages of 15 and 49 uses any method of family planning, a trend that explains high birth rate among adolescents.

Africa recorded remarkable gains in antenatal care, with a significant increase in the proportion of women attended by a skilled health worker at least once during pregnancy in North Africa – rising from 46 per cent in 1990-1999 to 80 per cent in 2000-2009.

On the other hand, the continent faces a formidable challenge in reducing the maternal mortality ratio. While all regions made progress on this indicator, the rate remains exceedingly high and tops 1,000 deaths per 100,000 in several countries.

Factors influencing the high rates include delays in deciding to seek care, delays in reaching care, and delays in receiving care. Other contributing factors include the high level of adolescent births and high unmet family planning needs.

Access to safe water remains virtually unchanged, mainly the result of the increasing rural–urban migration and poor living conditions in the informal settlements which have sprung up to accommodate the influx. Sanitation is still a struggle in most countries, especially for the rural population. Only a third of this segment has access to improved sanitation.

Africa’s performance on environmental indicators has also been mixed. Consumption of ozone-depleting substances has declined markedly and access to better water sources has improved. Yet although Africa’s contribution to greenhouse gases is marginal, emissions are on the rise and most countries are off-track to meet the biodiversity target.

The report points out that both short-term and long-term assistance will be needed to step up investments to African agriculture, including research, advisory services, and market-related infrastructure.

Official development assistance (ODA) to the continent has increased in recent years, but still remains far below the commitments made by development partners at the Group of Eight (G8) summit in Gleneagles, the United Kingdom, in 2005. 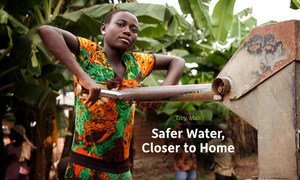 A United Nations-backed initiative designed to accelerate efforts to attain social development and eradicate extreme poverty in rural Africa today launched its second phase, aiming to improve the living standards of an estimated half a million people across the continent.