A Philippine lawmaker who champions disaster risk reduction in the Asia-Pacific region for the United Nations today called for an integrated flood warning and response system, as 3.2 million of her compatriots struggle with the impact of typhoons that caused widespread floods across the country.

“The country cannot afford suffering from so many floods that continually erode our development gains,” said Loren Legarda, the Asia-Pacific champion on disaster risk reduction for the UN International Strategy for Disaster Reduction (UNISDR).

“It is high time for the country to have an integrated flood forecasting, warning and response system and a holistic approach to the flood risk problem.”

“Disaster, climate change, and development are intrinsically linked. It is important to assess immediately the causes and effects of a major flood and to make recommendations that will improve flood mitigation and response preparedness before the next one hits the country,” she said.

Philippines is bracing itself for another possible storm this week even as large swathes of the country remain submerged from the combined impact of heavy monsoon rains, Typhoon Nesat, which struck on 27 September, and Typhoon Nalgae, which hit the country on Saturday.

More than 80 per cent of those affected are in the Cagayan Valley and Central Luzon regions and thousands of people opted not to leave their homes and instead sought safety in rooftops. Some 180,000 people – mostly those displaced by Nesat – have been sheltering in State-run evacuation centres.

Sea surges in Manila, the capital, breached a seawall and forced the evacuation of people living in informal settlements in low-lying areas. Strong waves hit coastal communities across Luzon, and falling trees toppled power lines cutting off electricity to many urban areas where there was also widespread flooding.

The latest update from the Philippine National Disaster Risk Reduction and Management Council (NDRRMC) indicates that there have been 59 reported deaths and 70 injuries, with 31 people missing.

As thousands of school children around the country are unable to attend school because of the flooding, Ms. Legarda – who is a member of her country’s Senate – urged them to reflect on the latest disasters and to “step up for disaster risk reduction” on the International Disaster Reduction Day to be marked on 13 October.

In a related development, the UN Children’s Fund (UNICEF) today delivered 3,000 hygiene kits and 3,000 water kits to families in the two affected northern provinces of Bulacan and Pampanga in Luzon region through the local government units.

The agency’s country representative, Vanessa Tobin, and an emergency team are visiting the area to assess the situation.

“I’m impressed by the effective organisation of many local government workers alongside NGOs and private sector,” said Ms. Tobin. “Supplies are getting through but we need to be vigilant to monitor childhood diseases as well as getting schools reopened and getting children back to learning.” 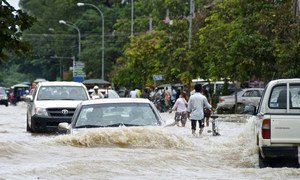 The United Nations International Strategy for Disaster Reduction (UNISDR) today voiced its concern at the millions of people who have been affected by the floods ravaging many countries in Asia, and urged governments to increase their investment in disaster risk reduction.