Cities on the frontline of global fight against climate change, UN officials warn

United Nations officials today urged the international community to take action against mounting threats posed by climate change on the world’s urban areas, warning that climate-related events could force up to 200 million people worldwide to flee their homes by 2050.

But the officials also noted that while cities are at great risk from the growing pressures of climate change, they also provided a solution to combating its effects.

Marking World Habitat Day, whose theme this year is “Cities and Climate Change,” Secretary-General Ban Ki-moon cautioned that the link between urbanization and climate change was “real and potentially deadly.”

“Rising sea levels are a major impact of climate change and an urgent concern,” he said, in a message delivered by Deputy Secretary-General Asha-Rose Migiro to a high-level meeting in New York. Mr. Ban added that with 60 million people now living within one metre of sea level, the world’s major coastal cities were at risk of being inundated by rising waters.

But he noted that the same cities which face “serious threats” from storm surges are also home to innovative measures helpful in combating climate change.

The Secretary-General called upon the global community to adhere to the “50-50-50 challenge” – a reference to experts’ forecasts stating that by 2050, the global population will have increased by 50 per cent from 1999 levels while greenhouse gas emissions will have had to decline by 50 per cent.

Margareta Wahlström, Special Representative of the Secretary-General for Disaster Risk Reduction, similarly pointed out that the world’s mayors and municipal leaders were on the frontline in the fight against climate-induced disasters.

“Cities today are bursting at the seams and they are both an opportunity for economies of scale which will reduce the impact of climate change, and a challenge because of the rapid pace of urbanization,” said Ms. Wahlström, who called for governments and the private sector to work more closely and quickly in an effort to reduce the risks facing urban areas.

She also announced that 841 cities and municipalities had joined the “Making Cities Resilient” initiative, launched by the UN Disaster Risk Reduction Office (UNISDR) over a year ago in an effort to reduce urban risks from climate-related disasters.

In his statement Joan Clos, Executive Director of the UN Human Settlements Programme (UN-HABITAT), suggested that the concentration of economic activities in urban areas made it cheaper and easier for cities to tackle emissions and climate hazards.

General Assembly President Nassir Abdulaziz Al-Nasser, meanwhile, emphasized that cities in the developing world were bearing the brunt of the effects of climate change.

“It is clear that developing countries are hit the hardest,” Mr. Al-Nasser said. “This impacts their overall development, including their ability to achieve the Millennium Development Goals (MDGs).”

“States and the international community can no longer afford to ignore the specific vulnerabilities of informal settlers to climate change-induced disasters, and the increasing risks they face,” they warned, further noting that close to a third of the global population live in slums vulnerable to serious environmental hazards.

Drawing attention to the importance of trees in strengthening urban landscapes, the UN’s Food and Agriculture Organization (FAO) spotlighted the role urban forests play in shielding cities from strong winds and flooding and buffering them from hot weather.

“Good practices in urban and peri-urban forestry can contribute to building a resilient city in terms of mitigation and adaptation to the effects of climate change,” said FAO Assistant Director-General for Forestry Eduardo Rojas-Briales, who called on countries to pay more attention to managing urban forests worldwide. 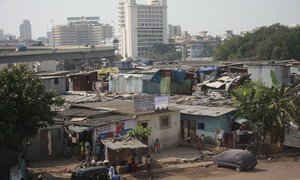 Governments, the private sector and civil society have to work much more closely together if the world is to build and sustain better cities, which are now home to more than half the global population, United Nations officials said today.