30 September 2011
The United Nations International Strategy for Disaster Reduction (UNISDR) today voiced its concern at the millions of people who have been affected by the floods ravaging many countries in Asia, and urged governments to increase their investment in disaster risk reduction.

Pakistan, the Philippines, India, Bangladesh, Cambodia and Thailand are all suffering from the effects of flood waters, and many people have lost their lives as a result.

“People shouldn’t die because of floods. We have the technology to alert communities before floods arrive. People can be evacuated in time, lives saved and livelihoods protected. Once again, early warning systems are the smart choice and the most efficient of all disaster prevention measures,” said Special Representative of the Secretary-General for Disaster Risk Reduction, Margareta Wahlström.

She also expressed her concern over the long-term economic impact of the floods on the affected countries, many of which have seen their infrastructure damaged and their services interrupted by the heavy rains, and said this would be one of the main issues she will focus on during her upcoming visit to the region.

According to a UNISDR report, floods account for a significant amount of damage to public assets such as health and education facilities, as well as to the livelihoods, homes and assets of poor people. However, most of these losses are not recorded by governments, making it difficult for them to invest in disaster reduction measures.

“The invisible nature of this large volume of disaster loss is one reason why so many countries are finding it difficult to make both political and economic decisions to prioritize investment in disaster risk management,” said Ms. Wahlström.

In Cambodia, tens of thousands of hectares of rice paddies have been inundated, and about 300 schools closed after the rains yesterday.

“The damage is very serious this year. It is the country’s worst flooding in a decade. More than 17,000 families have been evacuated to higher ground in 12 provinces across the country,” said Keo Vy, a Cambodian disaster official.

In Thailand, more than two million acres of farmland are underwater and more than 635 schools have been damaged, leaving thousands of children out of school.

In Pakistan, this is the second year in a row that the country has endured severe floods. The World Food Programme (WFP) reports that 5.4 million people have been affected, 73 per cent of the harvest has been destroyed, and 36 per cent of the livestock has been killed in flooded areas.

Gaelle Sévenier, a spokesperson for WFP, said the agency has provided 7,000 tons of food rations to 490,000 people in flood-affected areas in Pakistan, and added it will increase its efforts to provide food assistance to 500,000 new beneficiaries by the end of the month. 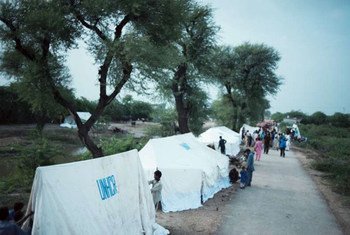 20 September 2011
Almost three quarters of crops in Pakistan’s flood-devastated province of Sindh have been destroyed or damaged, and nearly 37 per cent of the livestock lost or sold to avoid loss, a joint assessment mission of the United Nations humanitarian office and Pakistani Government officials has reported.