The United Nations committee entrusted with helping countries tackle terrorism today voiced concern at the close connection between terrorists and transnational organized crime, including the illegal movement of nuclear, chemical, biological and other potentially deadly materials.

After a day-long meeting at UN Headquarters in New York, the Security Council Counter-Terrorism Committee (CTC), which was set up in the days following the attacks by Al Qaida against New York and Washington on 11 September 2001, stressed that despite “the real and significant achievements of the last 10 years,” much remains to be done at the national, regional and international levels.

In an outcome document it said “terrorism continues to pose a serious threat to international peace and security, as evidenced notably by the terrorist attacks carried out recently in various regions of the world and by terrorists’ adaptation to, and misuse of new technologies, such as the Internet, for their communication, propaganda, financing, planning, recruitment and operational purposes.”

It noted with concern “the close connection between terrorism and transnational organized crime, including trafficking of illicit drugs, money-laundering, illegal arms trafficking, and illegal movement of nuclear, chemical, biological and other potentially deadly materials.”

Urging all to ensure zero-tolerance towards terrorism, it called for urgent action to prevent and combat the scourge by preventing those who finance, plan, facilitate or commit terrorist acts from using their respective territories and bringing them to justice.

Member States were also urged to prevent the movement of terrorists, including the supply of weapons, through effective border controls, to ensure that funds for charitable purposes are not diverted to terrorist purposes, to implement comprehensive strategies to address conditions that lead to the spread of terrorism including radicalization and recruitment, and to take appropriate steps to prevent and counter incitement to commit terrorist acts.

“Terrorism is still as potent a threat today as it was 10 years ago,” Secretary-General Ban Ki-moon told this morning’s opening session. “Tens of thousands of people have lost their lives. Repeated attacks have had severe economic consequences and taken a toll on State stability and regional harmony.”

Both the outcome document and the speakers stressed the need for States to ensure that measures taken to combat terrorism comply with international law, in particular human rights, refugee and humanitarian law, underscoring that effective counter-terrorism and respect for human rights, fundamental freedoms and the rule of law are complementary and mutually reinforcing.

Mike Smith, Executive Director of the Counter-Terrorism Committee’s Executive Directorate (CTED), noted that the international community had become much more aware of the fact that human rights and counter-terrorism need not conflict.

“Counter-terrorism programmes that ignore the human rights dimension are less effective and can even be counter-productive,” he said, also stressing “the critical need” to address the social and other societal conditions recruiters exploit to persuade young people to support terrorism.

“Naturally issues such as education, humanitarian support and good governance are important for their own sake, but they are also relevant to our work and should be taken into account in broader, more comprehensive and integrated strategies to address terrorism,” he said.

He noted the CTED’s close relationship with international and regional organizations such as the global police body Interpol, the Organization of American States (OAS), the African Union (AU) and the Council of Europe.

These organizations “have a familiarity with their member States, a strong presence in key countries, and very often important technical expertise,” Mr. Smith said. “Partnering with them means our recommendations are followed up and better implemented in-country than otherwise we could reasonably expect.”

With regard to the problem of incitement, he stressed that counter-terrorism work will have to engage actors going well beyond government, including civil society, professional associations, academics, journalists, parliamentarians, the private sector, teachers and religious leaders. “How to do this will be a challenge but it is one that all of us will need to take up,” he said.

“We have a very strong system of international cooperation which has to be worked on,” the CTC Chairman, Ambassador Hardeep Singh Puri of India, told a news conference. 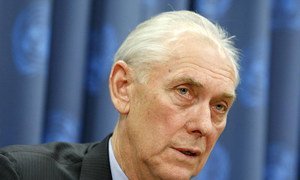 The international community has made substantive progress in fighting terrorism since the adoption of a wide-ranging Security Council resolution 10 years ago, but much more work still needs to be done, according to a top United Nations official.