Secretary-General Ban Ki-moon today renewed the commitment of the United Nations to assist the people of Afghanistan during talks with the country’s Foreign Minister in New York.

During their meeting on the margins of the 66th session of the General Assembly, Mr. Ban and Zalmai Rassoul also discussed the political and security situation in the country in the context of the ongoing transition towards greater Afghan leadership and ownership.

They agreed on the need for a sustained focus on development, governance and the rule of law, as well as a long-term commitment by the international community to support Afghanistan beyond 2014, according to information provided by Mr. Ban’s spokesperson.

In addition, the two men exchanged views on the forthcoming mandate review of the UN Assistance Mission in Afghanistan (UNAMA), which carries out a range of tasks including in the fields of monitoring human rights, promoting good governance and facilitating the delivery of humanitarian aid. The mission’s current mandate expires in March 2012.

Addressing the Assembly’s annual high-level debate last week, the Foreign Minister said the role of the UN must be adjusted to the requirements of Afghan sovereignty.

He also said that Afghanistan is negotiating strategic partnerships with its international partners, including the United States and the European Union, to guarantee the country’s security, stability and economic development once international forces leave in 2014. 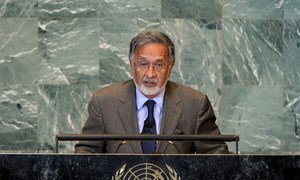 Afghanistan is negotiating strategic partnerships with its international partners, including the United States and the European Union, to guarantee the country’s security, stability and economic development once international forces in the Asian nation leave in 2014, the country’s Foreign Minister told the General Assembly today.