Syria runs the risk of falling victim to the same “new cycle of colonial wars” that was imposed on Libya, Venezuela told the General Assembly’s annual general debate today.

In a message delivered by Venezuelan Foreign Minister Nicolás Maduro Moros, President Hugo Chávez Frías said that the real reason for military intervention in Libya this year was to take over its wealth, and that the same imperialist tactics are being exercised in Syria.

“It is intolerable that the powers of the world intend to claim for themselves the right to direct the lawful rulers to resign immediately. This was the case in Libya and they want to proceed in the same way in Syria,” he said.

In March, the Security Council authorized Member States to take “all necessary measures” to protect civilians, following the crackdown against a popular uprising by the forces supporting the then leader Muammar al-Qadhafi.

Members of NATO subsequently carried out air strikes and, after months of fighting between pro-Qadhafi forces and rebels, the National Transitional Council (NTC) has been internationally recognized as having assumed authority over the country.

Mr. Chávez called for the immediate cessation of the bombing operation in Libya, and spoke strongly against any form of intervention in Syria.

“The ‘Libyan Case’ was brought before the Security Council on the basis of an intense propaganda by the Western mass media, who lied about the alleged bombing of innocent civilians by the Libyan air force, not to mention the grotesque media setting of the Green Square of Tripoli,” he said.

“After the Libyan air force was completely annihilated, the continued ‘humanitarian’ bombing shows that the West, through North Atlantic Treaty Organization (NATO), intends to impose their interests in North Africa, turning Libya into a colonial protectorate,” he added.

Mr. Chávez stressed that the same should not happen in Syria, and that military intervention should not be an option for the country.

“Only the Syrian people can solve their problems and decide their fate in the light of the right to self-determination of the peoples, an inalienable right in all respects,” he said.

“Were it not for some permanent members showing a firm stance, everything would be defined within the Security Council to authorize shooting missiles and sending bombardiers against Syria,” he added.

Top UN officials have repeatedly expressed concern this year about the Syrian Government’s response to a largely peaceful protest movement, calling it a violent repression which has resulted in at least 2,600 casualties.

The UN Human Rights Council has also ordered an inquiry into the violence after an earlier UN fact-finding mission outlined a litany of Government abuses, including murders, enforced disappearances and acts of torture. 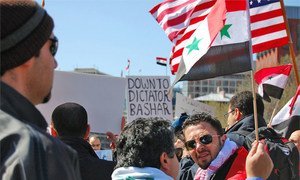 Top United Nations officials today renewed their call on the Syrian Government to end its crackdown on pro-democracy protesters and to cooperate with the Commission of Inquiry charged with investigating alleged human rights abuses.