27 September 2011
While the Security Council mulls over the Palestinian application to become a Member State, the United Nations political chief today called on the Israelis and the Palestinians to return to negotiations to reach a comprehensive and lasting settlement.

“Judged by the passions of last week, the parties remain far apart. No one can deny the depth of their dispute,” Under-Secretary-General B. Lynn Pascoe told the Security Council in his monthly update on the Middle East.

“But there are now some building blocks in place that could help make negotiations more effective than before – a clear timetable, expectations that the parties must come forward with proposals, and an active role of the Quartet,” he said, referring to the diplomatic group comprising the European Union, Russia, the UN and the United States.

“It will not be easy to chart a way forward, but now is the time for everyone to give diplomacy a chance,” he stated.

Israeli-Palestinian peace talks have been stalled since late September last year after Israel’s refusal to extend a 10-month freeze on settlement activity. The talks had only resumed a few weeks earlier after a two-year hiatus.

“As these deliberations continue, we must spare no effort to help the parties back to the negotiating table,” said Mr. Pascoe.

“The main obstacles to a Palestinian State are not institutional, but political: the unresolved issues in the conflict between the parties, the continuing Israeli occupation, and the ongoing Palestinian divide,” he added.

Mr. Pascoe recalled that the Quartet, which also met on Friday after the application was submitted, called for resumed negotiations and urged concrete proposals from the parties on territory and security within three months of talks resuming. It also urged them to avoid provocations on the ground.

In this connection, both Mr. Pascoe and the UN Special Coordinator for the Middle East Peace Process, Robert Serry, spoke out against today’s decision by Israeli authorities to advance planning for a large number of new settlement units in East Jerusalem.

A statement issued by Mr. Serry’s office noted that the decision not only ignores the Quartet’s appeal to the parties to refrain from provocative actions, but also “sends the wrong signal at this sensitive time.”

Mr. Pascoe also noted that more Palestinian structures in Area C – over 60 per cent of the West Bank where Israel retains control over security, planning and building – have been demolished to date in 2011 than in either of the past two years.

Today a group of UN human rights experts called for an immediate end to the demolitions of Palestinian-owned houses and other structures in the West Bank, including East Jerusalem, and urged Israeli authorities to prevent attacks by settlers against Palestinians and their property.

“The impact and discriminatory nature of these demolitions and evictions is completely unacceptable. These actions by the Israeli authorities violate human rights and humanitarian law and must end immediately,” said the three independent experts who work on the rights to adequate housing, water and sanitation, and food.

Given the human cost of the ongoing conflict, Mr. Pascoe also said it is essential that all sides impress on their security forces and civilian population the need to act responsibly. “They must do their utmost to avoid escalation, and take early action to defuse possible tensions,” he said, adding that extremists on both sides must not be allowed to inflame the situation.

Turning to Gaza, he condemned the continued firing of rockets from the area into Israel, while also calling on Israel to show maximum restraint in their response. He also called for the further easing of Israeli closure measures on Gaza, particularly in regard to imports of construction materials, exports, and freedom of movement of people.

In addition, Mr. Pascoe said there was no movement on Palestinian reconciliation, or progress regarding access to or the release of Israeli soldier Gilad Shalit, who remains in the captivity of Hamas.

The Under-Secretary-General also commented briefly on developments in Lebanon, where the overall situation remained calm, and in Syria, where “the polarization continues to deepen” between the regime of Bashar Al-Assad and the growing popular opposition. 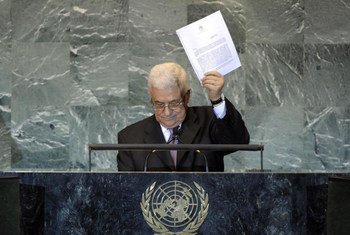 26 September 2011
The Security Council will discuss Palestine’s application to become a United Nations Member State on Wednesday morning, when it plans to refer it to the committee tasked with examining such requests.