The Security Council’s failure to agree on a resolution calling for action against Syrian authorities for their crackdown on demonstrators calling for political reform has come at a great human cost, the Netherlands told the General Assembly today.

“We need to listen to the people of Syria,” said Uri Rosenthal, the Dutch Foreign Affairs Minister said in his address to the Assembly’s annual general debate. “We need to stop President [Bashar] al-Assad’s Government from brutality murdering his own citizens in an attempt to crush their legitimate call for democracy.

“I urge all members of the Security Council to act decisively and agree on targeted sanctions against the regime.”

Mr. Rosenthal said the United Nations should play the leading role in supporting the people of North Africa and the Middle East to build institutions and develop the rule of law.

He also urged the international community to support uncensored access to the Internet, which he said is an essential tool for people to exercise their freedom of expression.

The emerging democratization must also provide an opportunity for the empowerment of women, Mr. Rosenthal stressed, noting that women represent 50 per cent of the human capital. “It is in every country’s interest to ensure that women take active role in society and the economy, as well as in the political process.

“I am convinced that, in free and fair elections, extremists who want to take away women’s rights will not succeed. Real democracy also means that rights of religious groups, including Christians, are respected.”

He stated that the Arab countries should benefit from increased opportunities to export agricultural products to the European Union, and called for the successful conclusion of the Doha Round of trade talks, which have been stuck on thorny issues such as the treatment of agriculture, industrial tariffs and non-tariff barriers.

“The world should not revert to protectionism. WTO [the World Trade Organization] has an important part to play in preventing this.”

Mr. Rosenthal also discussed the situation in Syria today during a meeting with Secretary-General Ban Ki-moon, with the two officials also exchanging views on the Israeli-Palestinian conflict and the global economic situation. 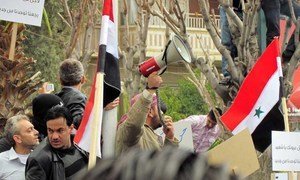 The United Nations human rights office today once again urged Syrian authorities to end their brutal crackdown against peaceful protesters and allow for an independent and impartial investigation of the situation in the country.