The international community has made substantive progress in fighting terrorism since the adoption of a wide-ranging Security Council resolution 10 years ago, but much more work still needs to be done, according to a top United Nations official.

“A lot of the mechanisms that we’ve developed, for example, are quite high-tech and therefore are much more difficult to apply in many parts of the world because the level of expertise, the capacity of government in some parts of the world, is simply not up to managing those highly technological solutions,” said Mike Smith, Executive Director of the UN Counter-Terrorism Committee Executive Directorate (CTED).

Mr. Smith’s comments to the UN News Centre and UN Radio came ahead of this Wednesday’s special meeting to commemorate the adoption of resolution 1373 and the establishment of the Security Council’s counter-terrorism committee.

The Council passed the resolution, under Chapter VII of the UN Charter, shortly after the so-called 9/11 terrorist attacks in 2001.

The resolution includes a range of global measures, such as calling for all countries to criminalize terrorism, denying terrorists access to financial resources, and preventing terrorists from crossing borders. The CTED assists the counter-terrorism committee, which is made up of Council members, with monitoring and analyzing the information provided on counter-terrorism efforts by Member States.

“It’s an opportunity for the counter-terrorism committee to hear from the broader membership of the United Nations what their impressions are on what 1373 has achieved and where they want it to go in the future,” Mr. Smith said of the special meeting.

As an example of the current challenges faced in counter-terrorism efforts, Mr. Smith cited the use by financial intelligence units of special computer programmes to screen through millions of transactions to identify suspicious activities.

“Now that doesn’t have a lot of relevance in a country where perhaps fewer than 30 per cent of the population have a bank account, where actually the problem is not people moving money through the banking system but carrying cash across the border or, even more likely, going down to the local market, giving the money to someone working there and having someone else collect the money in another city in another country – sometimes called hawala,” Mr. Smith said. “The solutions that we worked up in some parts of the world don’t work in other parts of the world.”

Referring to progress in counter-terrorism efforts, Mr. Smith pointed to the criminalization of terrorism in many countries’ legislation, the strengthening of law enforcement bodies dealing with counter-terrorism, and the creation of intelligence units to combat the financial aspects of terrorism.

“When you look at it like that, it doesn’t perhaps sound very much, but actually the sort of laws, mechanisms, strategies and programmes that you have to put in place in order to do that is really quite extraordinary and extensive,” he said, adding that “probably the most significant fact is that countries are now cooperating with each other, sharing information and trying to help each other in this global effort.”

“What made this particular case of terrorism, when it initially happened – notably the attack on 9/11 – what made it so difficult to deal with was that it was global,” Mr. Smith noted. “It was this group called Al-Qaida who had their base in Afghanistan, but who had recruits all over the world and who could carry out attacks in many parts of the world.”

Mr. Smith said that while there has been success in dealing with terrorist groups such as Al Qaida, focus must also be placed on countering the ideologies that underpin terrorism.

“Ideologies are much more difficult to deal with, and the ideology of Al Qaida has been picked up and moved around, and is being utilized by other groups in other parts of the world. In these circumstances, the threat is very real and it continues,’ he said.

“What that implies is that we have to put a lot more effort in to countering the ideology rather than simply building our defences against it because in the long-term the only way in which we’re going to stop terrorism is to persuade people not to be recruited, so that young people do not see value in putting on a suicide vest and walking in to a café and blowing themselves up.”

In addition to hearing from Member States on the application and future use of resolution 1373, Wednesday’s meeting will also include side events such as a gathering with representatives of civil society and non-government organizations (NGOs) to address the grievances felt by those who could potentially be targeted by terrorist recruiters. 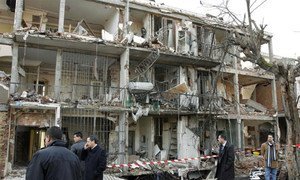 Secretary-General Ban Ki-moon today kicked off a counter-terrorism forum with a call for strengthening the collective resolve to defeat a menace that affects all nations and to build a safer world for all.