While life in the Libyan capital appears to be returning to normal, the interim authorities face numerous challenges as they seek to restore stability, including national reconciliation and establishing control over large stocks of arms, a top United Nations official said today.

“The challenges faced by the NTC are many,” Under-Secretary-General B. Lynn Pascoe told a meeting of the Security Council, referring to the National Transitional Council, which is now internationally recognized as the legitimate representative of the Libyan people.

The UN has started to deploy staff to its newly established UN Support Mission in Libya (UNSMIL), headed by the Secretary-General’s Special Representative, Ian Martin. The mission, based in the capital, Tripoli, will assist the authorities in restoring public security, plan for elections and ensure transitional justice.

“The capital displays remarkable normality, with its infrastructure overwhelmingly intact, public servants back in their offices even while government appointments are awaited, banks and shops open, businesses re-establishing themselves, most children back in school, and traffic once again heavy,” Mr. Pascoe reported today.

However, he added, pockets of fighting between pro-democracy groups and forces supporting the ousted regime of Colonel Muammar al-Qadhafi continue and the security situation in some parts of the country still remains fragile.

Mr. Pascoe drew attention to four key challenges facing the NTC, beginning with addressing national reconciliation and unity and ensuring that all military groups are brought under a unified command and the political authority of the NTC is carried out quickly.

It is also “imperative” that the NTC gain control over the large stock of sophisticated arms amassed by the Qadhafi regime, he stated. “The spread of these weapons and the danger they could fall into the hands of terrorists are matters of grave concern.”

Mr. Pascoe noted that reports of the uncovering of a mass grave near the famous Abu Salim prison in Tripoli – with some 1,270 remains reportedly of prisoners killed in June 1996 – indicate further the enormity of the human rights crimes perpetrated by the former regime against its own people.

“It is essential that the Libyan interim authorities secure this and other grave sites so that the fate of disappeared persons may be clarified as forensic expertise is available and evidence is available to future accountability mechanisms.

“At the same time, every effort must be made to prevent reprisal attacks on members or supporters of the former regime,” he stated.

The Under-Secretary-General also cited the need to ensure the welfare of African migrants and third-country nationals, as well as the early processing of those in detention and the security of those who continue to work in Libya.

On the humanitarian front, he said that at least 60,000 new displacements of Libyans have been recorded since mid-August as fighting intensified around Sirte and Bani Walid. Local authorities have indicated an urgent need for water, health items, food and some non-food assistance.

“Libya faces many challenges in the post-conflict phase, but I am confident that the Libyan people will overcome them with our collective support and assistance,” said Mr. Pascoe.

He added that the initial three-month mandate given to the UN mission offers the world body an opportunity to provide immediate help to the NTC and to engage with Libya’s civil society, as well as time to ensure that any longer-term mission that the Secretary-General may propose can be designed to provide effective assistance that reflects Libyan wishes. 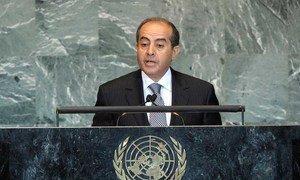 Calling for more help, Libya tells UN it could become a regional beacon for progress

Libya could become an “oasis for human development” in its region now that the regime of Muammar al-Qadhafi has fallen, a top official with the new Government told the United Nations today, but the country remains a “land not yet fully liberated” with widespread destruction of its infrastructure and an enormous ongoing toll on its population and social fabric.