Secretary-General Ban Ki-moon today stressed the need for a “credible national accountability process” over actions in the final stages of the civil war in Sri Lanka during a meeting with Mahinda Rajapaksa, the country’s President.

Mr. Ban reiterated the need for such a process as envisaged in the joint statement he signed with Mr. Rajapaksa in May 2009, when the long-running conflict between Government forces and the rebel Liberation Tigers of Tamil Eelam (LTTE) ended.

“He also underlined the need to find a political solution to the underlying factors of the past conflict,” according to information provided by a spokesperson for Mr. Ban after the meeting between the two officials.

Earlier this month Mr. Ban forwarded a report by a three-member United Nations panel of experts on accountability issues during the civil war to the Human Rights Council and the Office of the High Commissioner for Human Rights (OHCHR).

The panel found there were credible reports that both Government forces and the LTTE committed war crimes during the final months of the war.

The panel recommended that the Government respond to the allegations by initiating an effective accountability process beginning with genuine investigations.

It had also recommended a review of the UN’s actions regarding the implementation of its humanitarian and protection mandates during the war and its immediate aftermath.

In response to that recommendation, Mr. Ban has asked Thoraya Obaid, the former head of the UN Population Fund (UNFPA), to conduct the review. 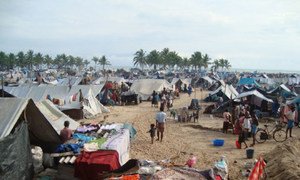